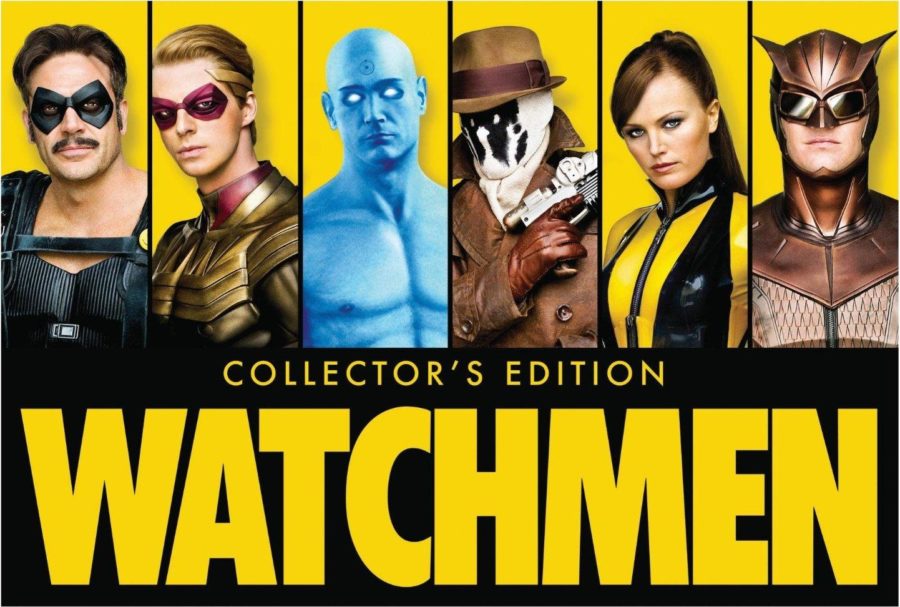 Is the world worth saving? Does it even need saving? If it does, then who bears the burden and duty of saving it? What lengths would they, and you, go to do so? All these questions and more are addressed in the 2009 adaptation of Watchmen, based on the graphic novel of the same name written by Alan Moore and illustrated by Dave Gibbons.

Before the film was released, the graphic novel’s already large fan base and the fantastically-done initial trailers raised the film’s hype to enormous proportions. Upon its release, the film did moderately well at the box office, making its budget back and then some.

Director Zach Snyder, known for his distinctive visual style including slow-motion and tinting of shots, is a director who has made himself known for his action and science-fiction films. Fresh off of his previous film 300, that same style is present but not as pronounced here. I do think that his depiction of an alternate-history America is spot-on and much in keeping with the novel. If you have read the novel, you will find yourself noticing little details that came directly from there.

Interestingly, this is a superhero film that is rated R. This is very rare nowadays, as a PG-13 rating allows studios to squeeze the teen/tween demographic for all their disposable income, and an R rating will not. This is not notable purely for the rating alone, but for the things that can be included because it is rated R. There is no way that Snyder could have stayed true to the novel without the R rating, and it was fortunate that the studios allowed him to continue with an R. Otherwise, this film would not have had the impact that it does, and would most likely be abandoned altogether and labeled as ‘unfilmable’.

One of the many marks of a superior film is that it is just as entertaining to listen to as it is to watch. In that regard, Watchmen succeeds on all counts. All the music that I noticed in the film was perfectly placed and beautifully composed. The instrumental tracks set the mood perfectly and accompanied the acting and set pieces well, and the few songs with vocals were equally great, most notably the track The Beginning Is The End by Smashing Pumpkins, which was also featured in the trailer that made people anticipate this film to a whole new degree. The track’s morose tone and somber, provocative lyrics encapsulate the themes of the film remarkably well.

Acting. What can I say? Every single actor in this film is entertaining as all heck to watch and embodies their character to the last detail. If I had to be nitpicky, I’d say that, of all of them, Malin Åkerman was probably the weakest in terms of character. However, this is not because of any acting fault on her part, as I believe that she portrays her character faithfully, it is just that there are so many outstanding performances in this film that a merely ‘good’ one pales in comparison. One actor in the film who stood out above the rest, however, was Jackie Earle Haley, who portrayed Rorschach. This portrayal is completely spot-on and earned him praise from many a critic. With Haley, there is intensity in every shot, the voice that you wish Bale’s Batman would have had, and endlessly quotable lines straight from the novel.

I have to mention one thing in this review because, well, we just don’t talk about male genitalia as often as we should in these Movie Mondays. That ‘thing’ as you can probably gather, is Dr. Manhattan’s thing. Except for his scenes in Vietnam and edited shots in the trailer, in which he wears a sort of black speedo, the glowing blue man is fully nude throughout the film. I don’t know about anyone else, but this was just uncomfortable and off-putting in scenes that I wanted to enjoy. In the graphic novel he is nude, but the comics-style format of the novel allowed for him to always be positioned so that his schlong was obscured by one thing or another. In a film, the same covering is impossible due to the constant motion of characters. I think that this is one case where Snyder would have been forgiven for differing from the novel. What difference would a bit of censoring have made to the overall plot and flow of the story other than to make a lot of the scenes more watchable? None. I rest my case.

One of my favorite lines from the film, and one of my favorite film quotes ever, is actually a shortened version of the line from both the film and the novel that was used in the trailer. There, the line was likely shortened because of the length and slightly obscene nature of the original. The original line reads: “This city is afraid of me… I have seen its true face. The streets are extended gutters, and the gutters are full of blood, and when the drains finally scab over, all the vermin will drown. The accumulated filth of all their sex and murder will foam up about their waists, and all the whores and politicians will look up and shout ‘Save us!’… and I’ll look down and whisper, ‘No.'”

While true to the novel, and very cool in its own way, I much prefer the edited trailer-version which goes: “The world will look up and shout ‘Save us!’ … and I’ll look down and whisper ‘No'”. The line is more versatile and quotable in my opinion, not to mention a little more ominous and wide in scope.

Despite the strong opening, Watchmen received very polarized reviews from critics and audience members. Some praised its faithfulness to the source material, while others described it as being hindered and restricted by the novel. Some praised the style that Snyder brought to the film, others found the settings boring and drab. Continuing this trend, a previous Stinger writer did a review of this film when it first premiered and hated it. I, on the other hand, love this film. Who is right? That is for you to decide.