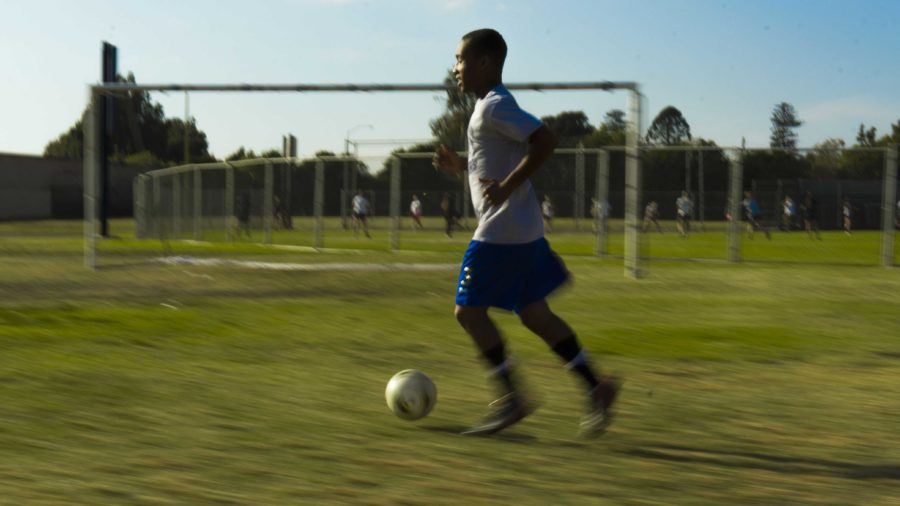 Quentin Francis, training hard, to make up for the deficit of players in soccer.

Cam High’s boy’s soccer team officially started up on the 18th of  November. The team will be headed by coaching veteran, Jesus Duran, who has taught boy’s soccer for 27 years, the past 10 at Cam High and 16 more  in other high schools.

According to Duran, any new drills added this year for the players will focus more on soccer as a specific training, where there is a ball at the feet, instead of weight training and stadium running. “We do a lot of tactical drills, small sided games where players are put in a field of 20 by 30 feet with teams of 8,” said Duran. “There’s a lot of contact, pressure and decisions to make.”

Practice for the team is regularly held behind the stadium bleachers or at the J.V. fields. Matches will not start until the end of November, when Cam High will play Aurora and Agoura High Schools as skirmishes before the official pre-season.

Playoffs will begin on February 18th, but Duran thinks, “we will be very hard pressed to make playoffs this year. There’s not a lot of experience and it’s going to be a very big challenge,” and in Duran’s opinion, “we won’t make CIF, but we have some really nice kids that work hard and give their best effort. They might not be the most talented team, but wins or losses do not matter. It’s about development.”

Quentin Francis, a three-year Letterman of Cam High, and one of the two captains of the team, thinks it is still too early in the season to judge and there is, “still time to grow. Even though we’re a young team we’ve come together pretty fast. The fact that we all want to win and we all enjoy soccer is good to see.”

The goal this year is to make back-to-back playoffs and Duran is putting his trust in training. “The more you play, the better you get and the better you will be.” The program he will run is based on some of the highest levels of soccer, placing the boys in what he thinks will be very challenging situations every day.

League play for the team will end February 2, and if the team makes it far enough, the C.I.F. championship  will play through the second week of March.