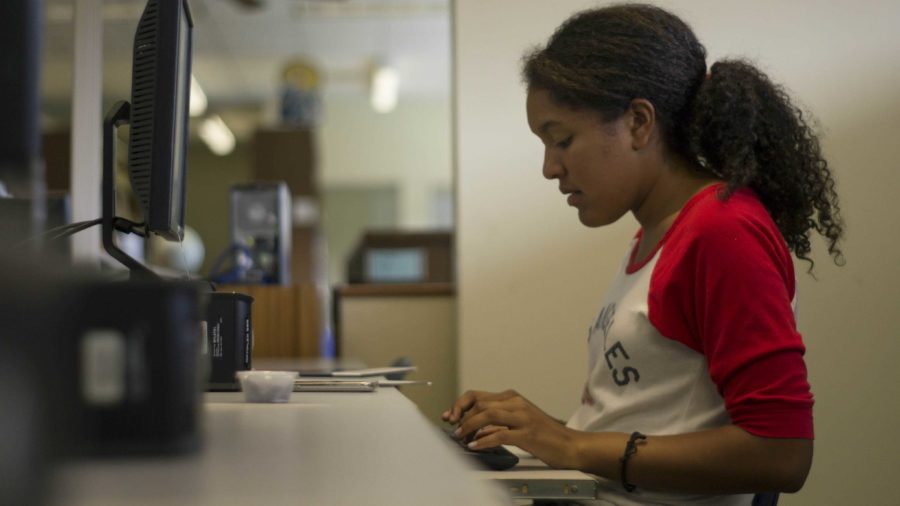 Jasmine Bruner, Senior, intent on using her skills through the computer types out a school assignment.

Since Governor Brown signed Assembly Bill 484, recently ending the STAR test in California, the ripples of the decision are moving outward across California public schools, including Cam High.

Students, nearly unanimously, are excited that the test is gone. “I feel good about it, it doesn’t take away from the classroom. We can learn more rather than take a test that doesn’t grade us,” said Shayla Burroughs, freshman.

Other students were curious as to what comes next. “Since there will no longer be a STAR, what will happen to the school’s API scores?” asked Olive Jones, freshman.

The Oxnard Union High School District has stated an interest in providing the new Smarter Balance Common Core Assessment, which is a test taken on the computer to evaluate students’ knowledge of various subjects, but no final decisions have been made according to Mr. Glenn Lipman, Cam High principal.

Some students and their parents opted out of the STAR test, a choice every family was allowed to make since the test’s inception. Steven Romero, sophomore, said, “I didn’t take the STAR test. I feel no one has to take it. It’s not counting on your grade, so you shouldn’t have to take it.”

“I don’t feel cheated that I won’t be taking the test. My grades say how I’m doing,” said Daniel Gallardo, freshman.

Vincent Manfree, freshman, feels that, it’s “bad because we’ve been using the same standards and have been studying off the STAR testing standards since third grade. You may not be able to understand the significant material. I feel cheated because I’ve been prepped for this test most of my life.”