Scorpions sting the Spartans once more 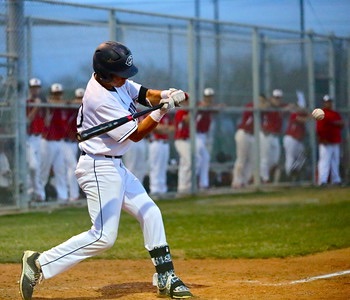 Cam High defeated Rio Mesa last Saturday in a close match ending with a score of 5-4 in Cam High’s favor.

Cam High and Rio Mesa have been enemies for over forty years. Although the Scorpions and Spartans are now in different leagues and no longer official rivals, the two-day baseball tournament shed light on the fierce competition that still existed between the two.

The game started off with a quick recap of Cam High’s victory against the Spartans on the previous Friday, which was also a close game with the same coincidental score of 5-4.

The first inning was merely a warm-up for both teams, as neither team was able to make it to home plate. However, things were just getting started.

The second inning provided a much better outcome for Cam High. Senior Matt Whitney scored the first run of the game after a center-field pop fly by junior Elijah Alexander.

Like the first inning, the third inning was short, and neither team manged to touch home plate.

From their choice of first batter, it was evident that Rio was determined to tie up the score. After a third base steal by Spartan sophomore, Jacob Flores, the Scorpions put their skills to the test. Cam High’s center-fielder caught a hit by freshman Austin Maciel mid-dive, causing the second out the Scorps needed. The last batter for Rio Mesa, junior Ryan Gonzales, was able to hit the ball far enough for Flores to steal home and score Rio Mesa’s first run.

With the end of the game approaching rapidly, the Scorpions went through their whole batting roster and scored four more runs during the fifth inning. Cam High was quick to strike down Rio Mesa and take away any chance they had to increase their score. By the time senior Alfonso Aguilera came up to bat, the bases were loaded Cam High was ready to defeat Rio Mesa once again. A pop fly generated the momentum needed to begin the final push to home, and Cam High was able to increase their score by one more point.

A series of one-hit and two-walks took place after Aguilera’s hit, leading Cam High to what seemed like an undeniable victory. The inning ended after a center pop fly by senior Anthony Malagon, the first batter of the game, was caught by Rio Mesa.

The sixth inning was uneventful compared to the fifth. Neither team scored any runs, and finally ended with a strikeout from a Cam High player.

The seventh inning was cut short and consisted of only Rio Mesa playing offense. A controversial call was made by an umpire about an infield fly made by the third batter. The crowd uproared as angry yelling broke out from both Cam High and Rio Mesa supporters, coaches, and players. Surprisingly, no one was kicked out of the game. “The infield fly call was definitely a borderline call,” said Mr. John Gonzalez, Cam High’s head baseball coach of three years.

Following the controversy, senior Ben Reyes hit the ball to left field. The ball was fumbled by two Scorpions before the two base runners made it home, increasing Rio Mesa’s score by two points.

It was now or never for Rio Mesa, as the game had just ten minutes remaining. The Spartans needed two more points to tie, but were only able to manage one more run. The game ended with a Cam High victory and a score of 5-4.

“We had a couple of missed defense cues, but we were able to hold them off and get the win,” said Gonzalez. “We try to make practices different and competitive,” he said.