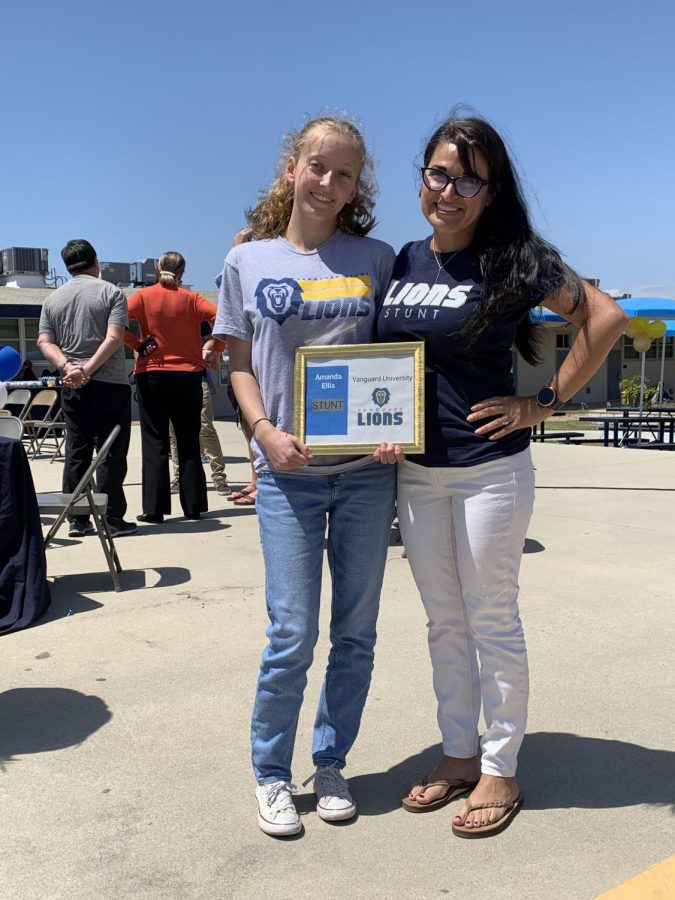 On April 20, 2022, Amanda Ellis had a signing in the quad. She is committed to stunting in college for Vanguard University. Amanda Ellis is a senior at Adolfo Camarillo High School. She is part of the cheer and STUNT team coached by Amy Shepard. She has been on both teams for all four years of her high school career. She is a very talented and sweet girl. Amanda is fulfilling her dream of continuing stunting throughout college.

She has been doing cheer/stunt since the age of six years old. This year marks her eleventh year of doing it, with many more years to come! Amanda always knew that she wanted to do cheer in college, but she never knew what type until this year. Some girls who have inspired her the most in STUNT are her cousins Emily and Ally, as well as her friend Lily Hayden. They have been by Amanda’s side for as long as she can remember. They have been there through the roughest parts of her career. Amanda’s eyes were especially drawn to her friend Lily. She knew she had to step up and fill her shoes when Lily graduated. Some of Amanda’s favorite memories are from this year’s season when her pod hit partner stunts 5 and 6 for the very first time at a game. According to Amanda, it was the most thrilling experience ever to have the entire team be as excited as they were.

Ellis is excited to start learning new skills at Vanguard University. She is most excited to learn more baskets. “It is a whole new experience to have full-grown women chucking you into the air” stated Amanda. She is the first athlete on the ACHS STUNT team to be committed and get a scholarship to a college. “It feels amazing, almost unreal. I think it is a really big accomplishment, but I don’t give myself enough credit as I should. I never even thought that getting a scholarship for STUNT was even possible. I just hope this shows other girls on my team that anyone can accomplish what I have. You don’t need to have the highest levels of skill either. It is just how dedicated you are to the sport itself” declared Amanda. The ACHS STUNT team and Amanda’s friends and family are very proud of what she has accomplished. We all wish her the best of luck with her new beginning.