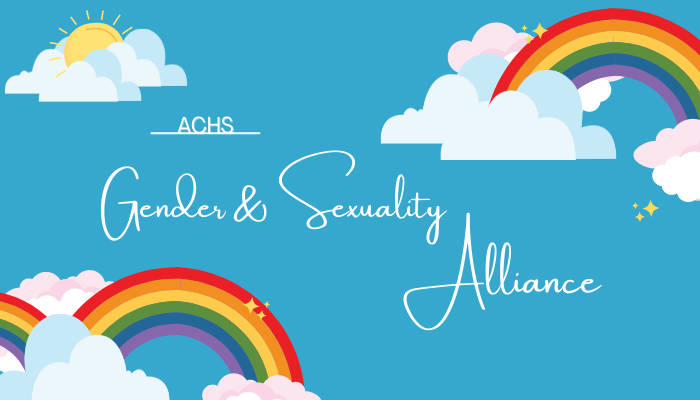 One of many clubs revived for the 2021 school year following the Covid-19 pandemic is Cam High’s GSA (Gender-Sexuality Alliance). Dozens of students gathered to attend GSA’s second Friday meeting on October 8th, featuring a video and Kahoot game about LGBTQ+ history. Originally founded as the “No Hate Club” in 2002 (a name chosen to avoid controversy), the name was later changed to the initialism GSA, standing for Gay-Straight Alliance. However, the club board decided last year to change it to Gender-Sexuality Alliance (following a nationwide movement) to be more inclusive of trans, nonbinary, and intersex individuals who might have felt excluded by the old name. The club advisor, a teacher at Cam High Christine Lawler, has been there “since day one.” Compared to two years ago when the club only met monthly, the club now meets every other Friday (twice a month).

The club has been met with positive reception from students and faculty alike. “We had over 40 members at our introductory meeting, but I would expect about 20-30 members to join meetings regularly. Attendance has definitely grown since our online meetings during last year’s distance learning.” said club president Jolina Le. The advisor Lawler hopes to keep the historic levels of attendance throughout the rest of this year and in following years. “This year I hope to keep the attendance up in our meetings. We have 50 members, which is historical. We’ve never had that many people involved. So we want to keep the enthusiasm up and we want to become more of a community service organization by reaching out to the rainbow coalitions that are in the county to become more active that way. ” she said.

Students are also optimistic for the future of the club under the leadership of Le and the rest of the board of GSA. “I think it has a lot of potential with Jolina being president and Lillian being vice president; they have a lot of hype around the school. I do [have high expectations]. Jolina is very organized, so I think that she’ll be able to make good events for GSA.” said Cam High junior, Alyssa Yoon.

Both Le and Lawler made it clear that GSA’s ultimate goal is to provide a safe, inclusive, and positive space for students to fully express themselves. “We have many goals: the main objective is to provide a safe space on campus for people of binary and nonbinary gender [and] sexual [orientations].” said Lawler. As stated by Le, the pandemic presented many people with an opportunity to explore and understand themselves. Le also noted her observations regarding the return to the classroom. “Coming back from distance learning, I’ve noticed that homophobia on campus is much more pronounced than it used to be — even in the form of “harmless” jokes, there are still very derogatory undertones.” said Le. “I’ve found that being part of GSA is so validating and helps to normalize the queer experience.”

When asked about why she decided to become the advisor of GSA (at the time, the No Hate Club), Lawler stated, “Because no one else would do it. Just that simple. Nobody had the courage to stand up and say ‘this is needed on campus and we’re going to make it happen.'” Now, GSA is coming up on its 19th year of promoting positivity and inclusivity at Cam High.

Q&A with Jolina Le
When was GSA founded?
The first GSA at ACHS/Camarillo High was established in 2002, originally as the No Hate Club. It ended up becoming a small and inactive club up until two years ago, which is when Ashley Cates stepped in as president and revived it with more interactive monthly meetings. She just graduated last year, so being able to take what I’ve learned from her leadership and bring it to this year’s GSA has been really helpful.
Approximately how many members attend each meeting?
We’ve only had two meetings so far this school year, so it’s hard to say for sure; we had over 40 members at our introductory meeting, but I would expect about 20-30 members to join meetings regularly. Attendance has definitely grown since our online meetings during last year’s distance learning.
How do you try to keep the club engaging and enjoyable for students?
I started off by getting members involved with our goal-setting for the year. We filled out interest forms at our intro meeting to get a feel for what events and activities everyone would like to see. Since then, I’ve been incorporating the feedback that we got to create diverse meeting plans, so that there’s always something new to do together – we’re trying to keep a mix of both fun, social activities as well as conversations on more serious topics. So far, we’ve celebrated numerous LGBTQ+ holidays, held an open discussion, watched a mini-doc, and played a Kahoot! in observance of LGBTQ+ History Month. It definitely helps that I have such an engaged board and can also reach out to my members to really understand members’ expectations for GSA.
Why was the name of the club changed from Gay-Straight Alliance to Gender & Sexuality Alliance?
It was actually a nationwide movement to change the emphasis of the club names. We decided to follow suit last year to be more in line with our goals of inclusivity for the entire LGBTQ+ community. The new name acknowledges the trans, nonbinary, and intersex members of our club, and overall is more accommodating to the modern understanding that gender and sexuality are a spectrum, which is more diverse than just gay or straight. It puts the focus onto our LGBTQ+ identities instead of just our relationship with non-queer people.

What are GSA’s goals?

Our main goal this year is to foster a welcoming environment for LGBTQ+ students, both in our class and also across our campus in general. I’d like to ensure that ACHS is a safe space to be out, where queer identities can not only be tolerated, but respected and celebrated. Our docket for the year includes the promotion of self-confidence and mental health resources, education on LGBTQ+ topics, strengthening relationships with other GSAs, and overall student community-building. I’m planning to really increase our presence.
How does a typical meeting run?
Generally, we’ll go over any club business, like open board positions or upcoming events, and then we’ll take a moment to acknowledge recent LGBTQ+ news or days of observance. We just had National Coming Out Day this past week, which is one of the more well-known holidays, but I always try to recognize the smaller events, too. After that, we’ll always have some sort of group activity, which is usually aimed at building connections between our members.
Why did you decide to become president of GSA?
I was vice president last year, so coming back as president seemed like the next logical step to take. I’ve found that being part of GSA is so validating and helps to normalize the queer experience, and as president, I’m really excited to have the opportunity to provide that affirming space for other LGBTQ+ students on campus, especially for those who don’t have the best support system at home. There’s definitely so much more that can be done in terms of improving LGBTQ+ acceptance at our school and in our community, and I’m looking forward to using my role in GSA as an outlet to implement initiatives which support that goal.
Any last thoughts you’d like to include?
Queerness throughout the pandemic was a significant, although maybe often overlooked, factor in our experiences during the stay-at-home orders. All that time to ourselves gave so many of us the opportunity to explore our own identities and really understand ourselves better – it seems like many more people are happily and proudly out now. At the same time, a lot of students were also unfortunately stuck with their unsupportive families and had to endure that constant negative atmosphere for over a year, without the relief of what in-person school might have been able to provide. Coming back from distance learning, I’ve noticed that homophobia on campus is much more pronounced than it used to be – even in the form of “harmless” jokes, there are still very derogatory undertones. We’re real people, not a punchline. I have been really surprised because I haven’t seen this as frequently or overtly in the classrooms before as I do now – somehow that culture of homophobia and transphobia has become more widely accepted in certain social groups. I hope that this year, GSA can help to address this issue by promoting a better understanding of the LGBTQ+ community. Ideally, we would make ACHS into the safe haven that so many students aren’t able to have at home.