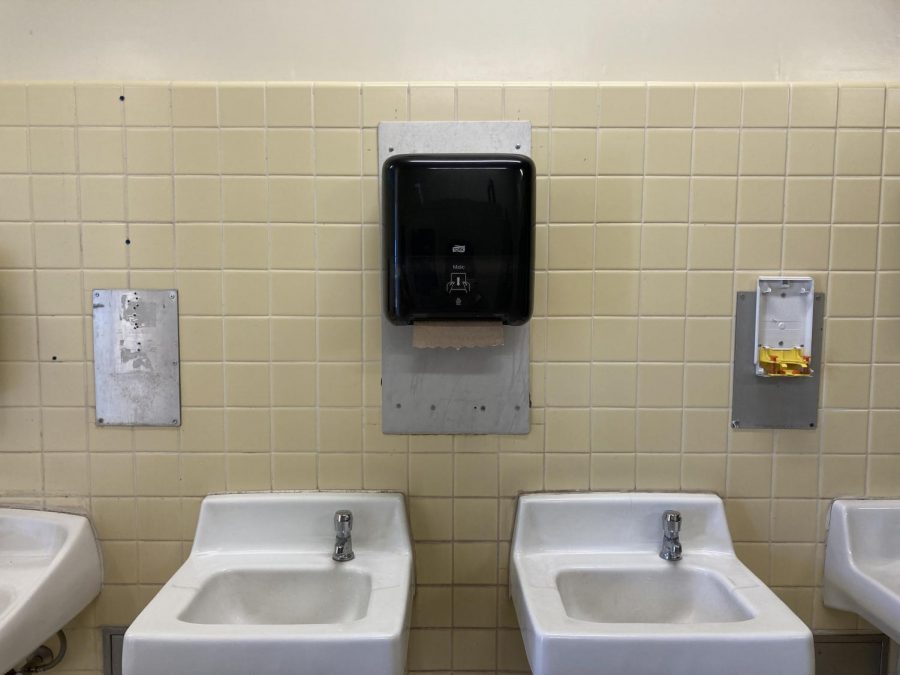 The soap dispensers in the girl's C-building bathrooms are a few of the many victims of this new Tik Tok trend.

Tiktok’s new trend, devious licks, made its first appearance on social media a couple of weeks ago as the newest and most popular trend by far. This trend has just progressed more and more with new people joining in everyday and taking it further than any other trend before. Devious licks is when people take pictures/record themselves taking items from schools and public areas, stealing everything from toilet paper to school projectors and even boxes of masks. As it is still a fairly new trend, devious licks are just getting more popular as more people are starting to participate.

It was first introduced to social media (Tik Tok) on September 1st, 2021 and has now moved to almost all platforms including Instagram, Twitter, and even Snapchat. Not only is this trend affecting stores/businesses, but schools and the people who attend there. For example, it has taken place and has affected the students of Adolfo Camarillo High School. Some examples of that could be from Cam High Junior, Aaron Villa, was asked “has this trend affected you personally and if so how?” He answered “Yes, it does affect me personally as teachers are starting to restrict bathroom access more than ever and has caused controversy throughout the school, students and staff.”

The Oxnard Union High School District has even made a statement of their own saying “We want to make you aware of a trend on social media that is taking place in schools across the country and right here in our own district. It is called “devious licks” and it is causing students to vandalize property on campuses.” This trend has even caught the eyes of school administrators as it is affecting them as well and not just in schools but people in public areas. The trend first started in schools, more specifically high schools and has jumped everywhere to bathrooms, stores, and has even caused more caution on the road for cars as people are taking street signs and may make it dangerous to drive in certain areas.