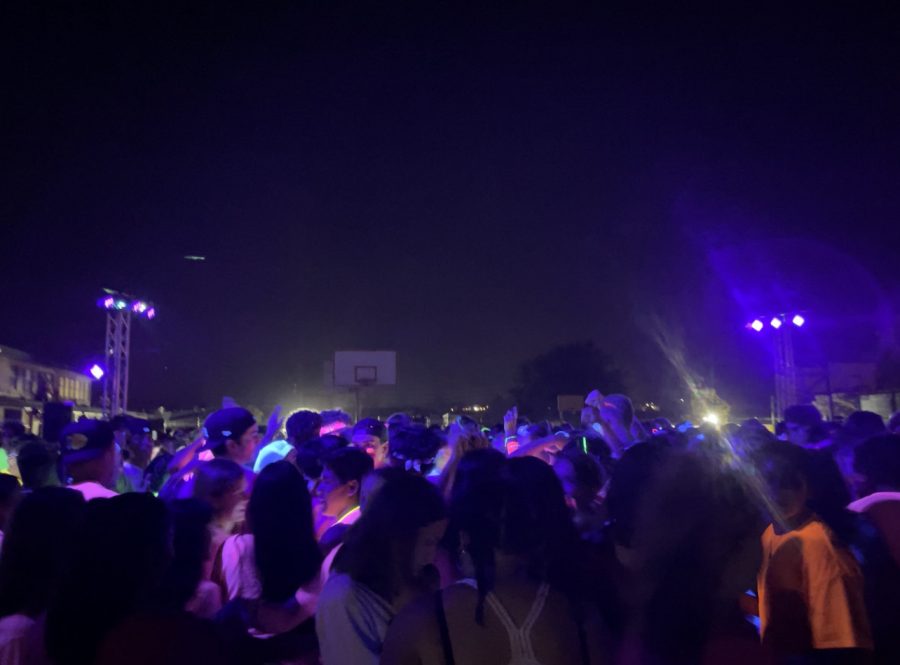 Cam High students at the Neon Dance on August 27th

Following the beginning of the fully in-person 2021-2022 school year at Cam High, ASB (Associated Student Body) decided to kick off this new era of post-COVID-19 learning with the first school dance of the year: a Neon Dance.

With the football game–originally to have taken place before the event–cancelled because of the opposing team having COVID-19 cases, the only event that was executed of the two planned was the Neon Dance. Instead of being held in the gym like previous years, the dance was held on the outdoor basketball courts for a more open-air party. With music, flashing neon lights, and plenty of glow sticks, over 800 Cam High students attended the dance, which lasted from 7 p.m. to 9 p.m. on August 27, 2021.

Cam High Senior Mollie Schafer and Freshman Elle Jones mentioned they enjoyed the social aspects: “I enjoyed seeing a bunch of people, like my friends,” said Schafer, while seniors Grace Rivera and Amanda Ellis said the aspects they mainly enjoyed were the dancing and music. Rivera did include that, while she liked dancing, she did not like, “how you couldn’t move in the middle, [as] the mosh pits were horrible.”

There were some other downsides about the dance that these students mentioned. Devin Chandler, Cam High Senior, stated, “The paint throwing was very inconsiderate of whoever brought that.” Jones mentioned the water station, saying, “The only little bit of water wasn’t that great.” Something all five of these students agreed on was that all the glow sticks being thrown around and laying on the floor were a mess.

Matthew La Belle, Principal of Cam High, also had something to say about the glow sticks: “The throwing of glow sticks didn’t make me as happy as I could be, but I know that won’t happen again.” He made this claim in regards to student’s safety, adding on, “I’m fearful a student could get hurt.”

Similarly to Jones, La Belle mentioned how the water station could have been been better, and even though some students seemed to like the lights, he did say that, “Lighting was an issue because power wasn’t working, so we’ll potentially bring in some outside source.” One other component he noted that needed improvement was the bathrooms: “The bathrooms weren’t powered because of construction, so we had to adjust to the gym.”

Even with unanticipated issues and complications, both the students and La Belle found the dance to be overall enjoyable. All five students claimed that it was a memorable start to their year, and that they would all go to the next dance. La Belle remarked, “Seeing everybody enjoying themselves and seeing the smiles on every kids face was super fun, so yes, I’m constantly looking forward to the next one.”

The next dance will be Homecoming, and you can purchase tickets for that here. Tickets are $50.