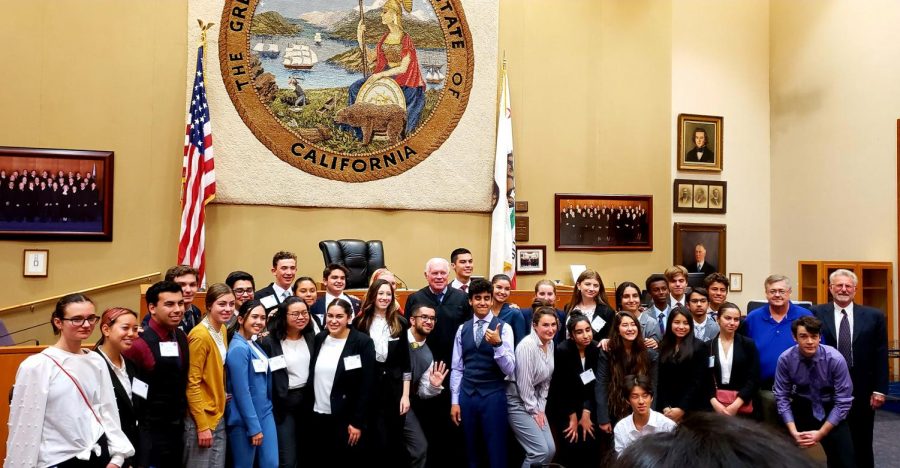 Cam High's Mock Trial team poses for a picture after finishing a round.

Cam High’s Mock Trial season came to a close on Tuesday, Feb. 25, 2020 after the team finished in tenth place.

This academic after-school activity focuses on improving public speaking and getting students involved in legal fields and law enforcement by participating in a hypothetical case that changes with each competition year. Students take on the roles of different court positions and work to present the case.

The team consists of 16 to 20 students with eight witnesses — four for the defense side and four for the prosecution side — bailiffs, a count-clerk, and attorneys. These students receive a case in Sept. and spend the next six months learning and preparing to compete against other high school teams.

This year’s case was centered around a man who may have murdered his wife. The wife ended up dead in the bathroom, but, according to the defense side, she went to the bathroom, slipped, and hit her head on the bathtub. The prosecution argued that the couple had gotten into an argument, causing the husband to hit the victim upside the head. The husband is also accused of drowning her.

The first competition day was on Monday, Feb. 24, 2020. The varsity Mock Trial team faced Monte Vista High School and won. Round two was against Nordoff High School from Ojai, and the team was victorious again. On Tuesday, Feb. 25, round three began and Cam High faced against Simi Valley, losing the round but later winning against Channel Islands High School.

To continue on to compete in the county finals, which is set to take place in Los Angeles this year, the team would have had to win four rounds. Since the team won three of the four rounds their average score was taken in order to determine their ranking, which was tenth out of 30 teams.

Puja Malyala, senior and co-captain of the varsity prosecution team, said, “We did not make it to the semi-finals, which is okay because we placed 10th place and there are 30 teams. We worked our hardest and had a blast. It was a great accomplishment though.”

Mr. Shawn Near, one of Cam High’s Mock Trial coaches said, “We were not as polished as past years. Some statements were missed or forgotten. Areas could have been stronger when questioning witnesses and their answers are given back. With that being said, pre-trial attorneys and expert witnesses did very well, and I think we will just work even harder next year.”

At the awards ceremony that took place on March 2, Kamila Celmeta, sophomore, won a third-place award for playing the part of a witness.

Near said, “We also got two Most Valued Player awards last night that were given to hard workers for our junior varsity and varsity mock trial teams. For JV, Haley Jeffers, junior, won as a defense attorney, and for varsity, Juliana Rentria, senior won as an expert witness.”