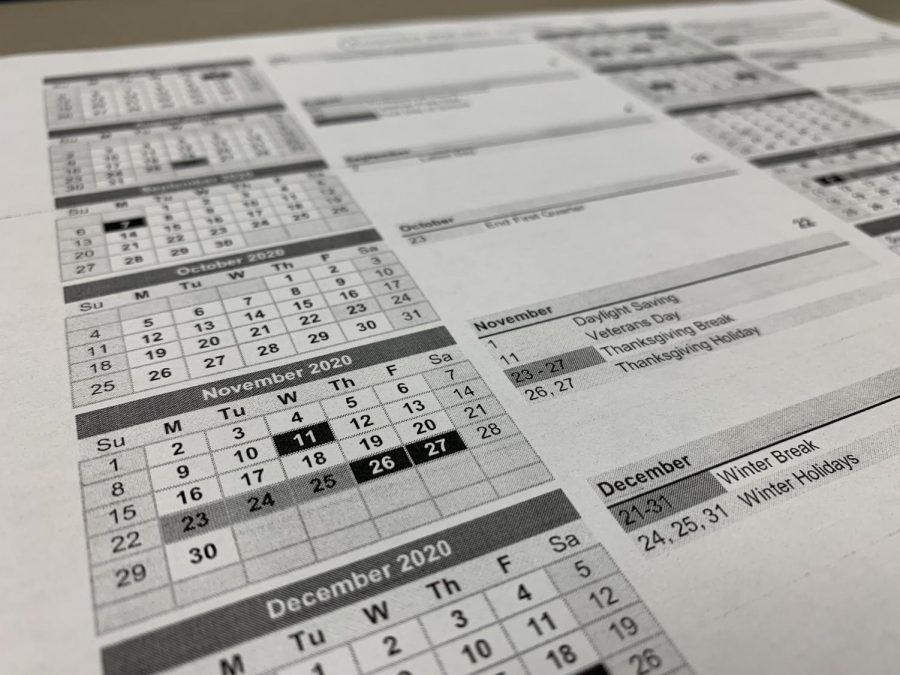 Pictured is a copy of the new schedule that was recently voted on.

The Oxnard Union High School staff recently voted not to implement a new calendar that would cause the school year to begin earlier and end later.

The vote was 353 to 272 in favor of not altering the calendar. A ⅔ majority was required to pass the new schedule. Cam High was the only school to have the majority of staff members voting in favor of the new calendar.

The proposal started with a district-wide committee in which Ms. Lori Pristera, Cam High’s ASB advisor, participated in. Pristera said, “We talked about our main problem with the calendar which was ski week. We all came to the consensus at that meeting that we needed to put out a google form survey asking everyone if they were unhappy with the calendar and why. An overwhelming amount wanted to change the calendar.” The two big issues the new calendar dealt with were ski week and first semester ending after break.

The new calendar was a two year process with most of the shifts happening in the second year. The only difference in the proposed 2020-2021 and the original schedule is that the middle three days of ski week would have been removed in exchange for getting out of school three days sooner.

The more significant changes were going to occur in the 2021-2022 year where the school year would start Aug. 16 compared to the previous year which was on Aug. 26. This transition would have cut five days off of summer. Also, first semester would have ended the last day of winter break and, to keep the same amount of days, school would have ended on June 3.

Pristera, who voted for the new calendar said, “Personally, I felt that change would have been best for the students. The AP kids are now missing three weeks of instruction because of the current calendar with ski week. Plus, athletics are also losing tens of thousands of dollars with us not being in school for the first couple of football games.”

Ms. Marisa Stuteville, Cam High counselor was against the new calendar and said, “If we changed our calendar it would really throw off other people’s schedules who have kids in other districts. I have two students in the Ventura Unified District so, personally, I would have to pay for childcare for three weeks.”

One of the questions that was brought up following the vote was why Cam High voted so differently compared to the other schools. Mr. Thomas Taketa, Cam High counselor said, “I have friends, counselors, and administrators at some of the Oxnard schools and there is a percentage of the Hispanic population that goes back to Mexico to visit family before the break and stays there even after school begins again. If we ended the first semester at Christmas, they would miss final exams and the beginning of the second semester. Some of the people I have talked to said this would cause even more chaos.”