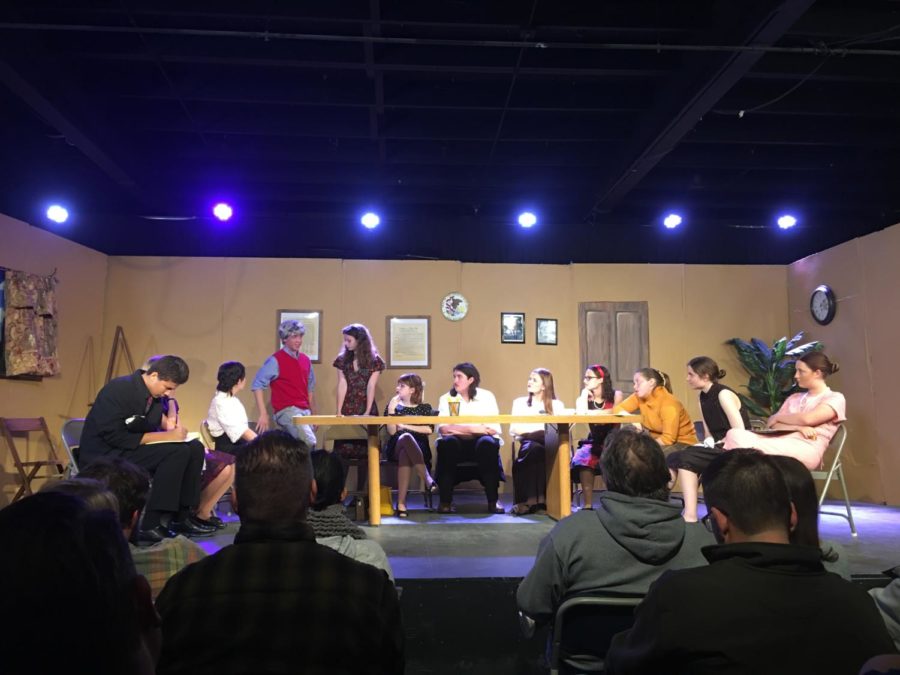 Cam High's drama class put on a performance of The 12 Angry Jurors in the blackbox theater on December 5, 2019.

The play was adapted and revised from 12 Angry Men, written by Reginald Rose, to support a gender-neutral cast on a high school stage. Since Rose’s play was adapted from its original CBS Studio One format, it has appeared on Broadway and in theaters across the nation.

In 12 Angry Jurors, a jury is locked in a room until they form a verdict on a murder case. The majority of the jury believes that the defendant—a 19-year-old boy accused of murdering his father—is guilty and should be sentenced to death. In Cam High’s production of this play, senior Mel Prouty plays Juror Number Eight, the sole juror who believes the boy is not guilty and that the matter of his life should be taken seriously. However, Juror Number Three played by junior Evelyn Adams, is also very strong-willed but is set on ensuring the defendant is put to death. Left to mediate this chaos is the Foreman of the jury, played by senior Emily Valencia. These three actors stood out most because they were powerful in their delivery of lines, body language, and overall they did a great job of capturing the audience’s attention without breaking character.

Cam High’s theater program handled the tension of the play effortlessly. For example, silence was a key factor in creating this build-up of tension. The brief but weighty silences between lines allowed for suspense to build within the scene and be released for emotional effect. The cast would also alternate between silence and a calm manner to speaking, yelling, and arguing, before returning back to the previous contemplative and loaded silence.

On the other hand, during some sections of the play, it was a bit hard to understand what some cast members were saying. Senior Shaeley Hicks, who had issues hearing, said, “The actors should work on projecting their voices more.” Other than that, this production was easy to follow and entertaining.

Cam High’s theater program experienced many challenges during the production of this play ranging from technical issues to training new people who had never acted or worked backstage before joining this class. Overcoming these obstacles was challenging for the cast but the extra hours and hard work became evident as soon as the stage lights came on. Prouty said, “It’s an amazing thing, to see people get better and better in something that they want to do.”

With that said, this production’s opening night performance was one to remember; with mystery, suspense, and a dash of humor this production is a must-see!