Scorpions are Marching Into the New Season 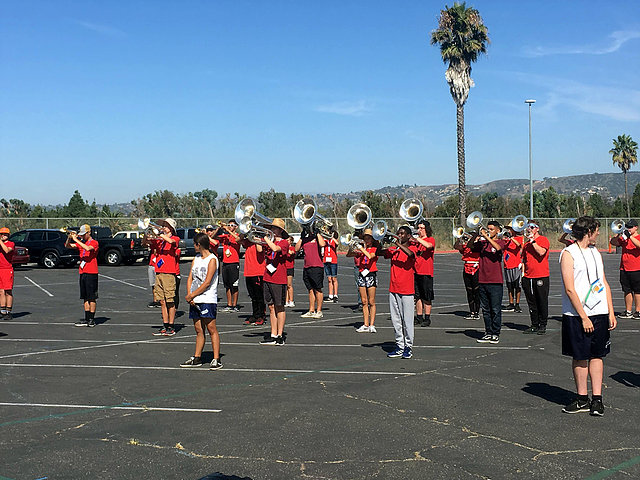 “The concept is about moments that happen and snippets of time that we miss with each other due to technology,” said Mr. Daniel Cook, co-band director with Mr. Cameron Guerrero. The themes are normally inspired by various pieces of music or art pieces.

Cam High’s Marching Band plans to participate in the Southern California School Band Orchestra Association (SCSBOA) classified as an A4 band, which means they are competing against larger bands that have 91 to 120 musicians. This is the first time the band will be participating in this category. In previous years, the band usually participated in the A2 category, meaning there were only 51 to 70 musicians in each band.

Competing in A4 and reaching championships may prove to be more of a challenge since Cam High’s Marching Band has not qualified for it before. However, the band did reach championships in A2 in 2007.

Victoria Bates, junior, who is currently in color guard, is motivated to make it to finals and become a color guard leader. Bates said, “My goal for this year is to be the very best I can be.”

Kaylie Pritchard, senior and this year’s drum major, said “This year, I want to give it my all and go 100 percent, through a good and positive attitude.” Pritchard hopes that the band is able to qualify for championships this season.

The marching band practices after school on Monday, Tuesday, and Thursday from 3:15 pm to 6:00 pm. During this time the band learns new field positions for their show and they also practice four to eight pages of music that require memorization for their performances.

The marching band’s first performance will be on Sept. 28. and will showcase bands from various schools. The band’s full competition season and all dates can be seen at their website.