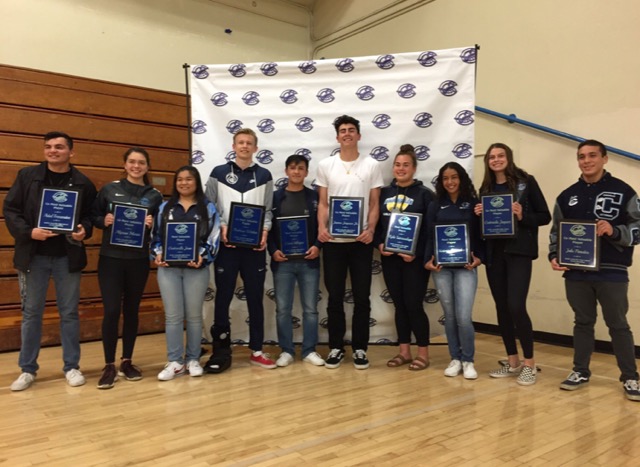 The Winter Sports Awards Ceremony was held Monday, March 11 from 7:00 P.M. to 9:00 P.M. to recognize student- athletes who participated in and excelled at winter sports.

A total of ten students from the seven winter sports were awarded with the Most Valuable Player award. These student-athletes were nominated by their coaches for their skills and abilities. All the MVP recipients received engraved plaques inscribed with their names and the sports they participated in.

Two athletes were awarded the boys basketball MVP of the season, one being senior Jaime Jaquez Jr., co-captain and future basketball player at University of California, Los Angeles, and the other was senior and co-captain Andrew Wetter.

Alyssa Marin, junior, and Gabriela Jaquez, freshman, were the MVP’s of the girls basketball team and both ended the season with an average of over 14 points scored per game. Both athletes have been playing since second grade. “[Receiving MVP] is really great and I’m truly grateful for my coaches and teammates for helping me get it. My biggest support has come from my family, teammates, and coaches who have pushed me to be the best player I can be,” said Marin.

The boys soccer team’s MVP award was given to Cesar Villegas, senior, and the girls soccer MVP was awarded to Victoria Gonzalez, sophomore.

“I just finished my third year of wrestling and getting MVP meant a lot to me because all of the wrestlers on varsity dedicated this season to Coach Wilson. He really drove us in our matches and pushed us even when things got hard in a match,” said Fernandez.

The girls water polo team was the only water polo team to play during the winter season, since boys water polo is a fall sport. The goalie, Kylie Tuimaualuga, senior, was awarded MVP. “I’ve worked hard in water polo and I’m happy to actually get MVP. My family and coaches have always been really supportive through the seasons,” said Tuimaualuga.

The Spring Sports Awards Ceremony will be held at the conclusion of the school year and the Spring sports season.