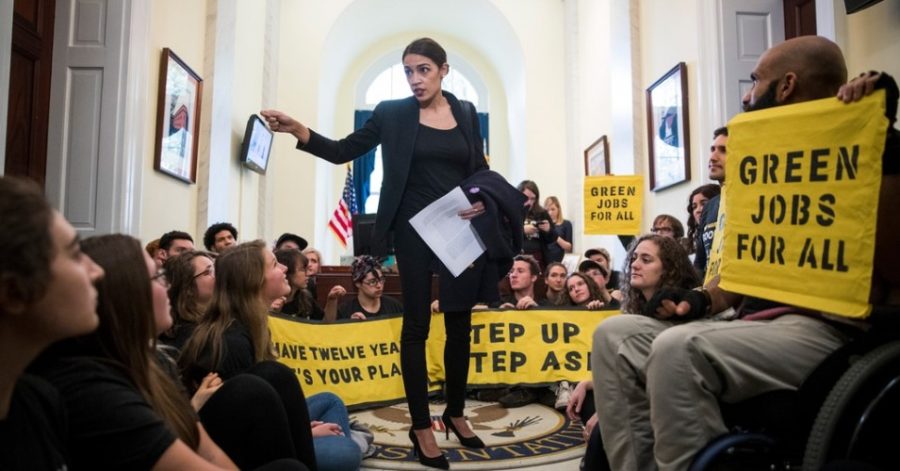 The Green New Deal (GND) is a proposal to convert the United States fossil fuel economy to a ‘green economy’ in order to address climate change and help the Earth’s environmental state.

The proposal, presented by Democratic New York Representative, Alexandria Ocasio-Cortez, takes a similar approach to President Franklin D. Roosevelt’s New Deal and incorporates modern ‘green’ ideas. The GND may sound like an appealing solution but has drastic drawbacks in regards to funding and execution.

Overall, the GND would be detrimental to the economy because of the radical, socialist ideas that Cortez seeks to implement. If the deal were to be implemented, many Americans could lose their jobs and their money.

Cortez has not directly said how she will fund for the plan that includes establishing “universal healthcare,” “guaranteed federal jobs,” “food security,” and a “zero emissions transportation system.” Fulfilling Cortez’s standards in the Green New Deal would require between $51 trillion and $93 trillion over 10 years according to studies by a center-right advocacy group.

As a response to the GND proposal, Gates said in a 2019 annual letter, “It’s not realistic to think that people will simply stop using fertilizer, running cargo ships, building offices, or flying airplanes. Nor is it fair to ask developing countries to curtail their growth for the sake of everyone else. For example, for many people in low- and middle-income countries, cattle are an essential source of income and nutrients.”

Gates and Cortez are humanists who blame humans for causing global warming.  In an interview, Cortez said, “the world is going to end in 12 years if we do not address climate change, and your biggest issue is ‘how are we going to pay for it?'”

Unlike Gates, Cortez does not seem to understand how economically devastating her plan is because she is fixated on saving the world’s ‘inevitable death’ in 12 years using the GND. Cortez is not putting on a facade; she just comes off as naive.

First and foremost, the GND is not realistic. Upgrading every building, changing plastic items to be eco-friendly, and banning almost all sources of greenhouse gases requires massive change from private owners, businesses, and citizens. The need for eco-friendly railways and ending plane travel requires an unrealistic amount of changes.

In addition, the plan would not solve climate change if only the U.S adheres to the GND requirements. In order to save the environment, the GND calls for eliminating plastic and eradicating carbon emissions to have a significant impact; however, other countries greatly contribute to pollution.

It is admirable of Cortez to try to solve a cause that poses a threat to everyone. However, it is unlikely that the Earth will die in 12 years due to climate change. Reducing pollution is smart, but the GND has ideas too radical to execute at the moment.