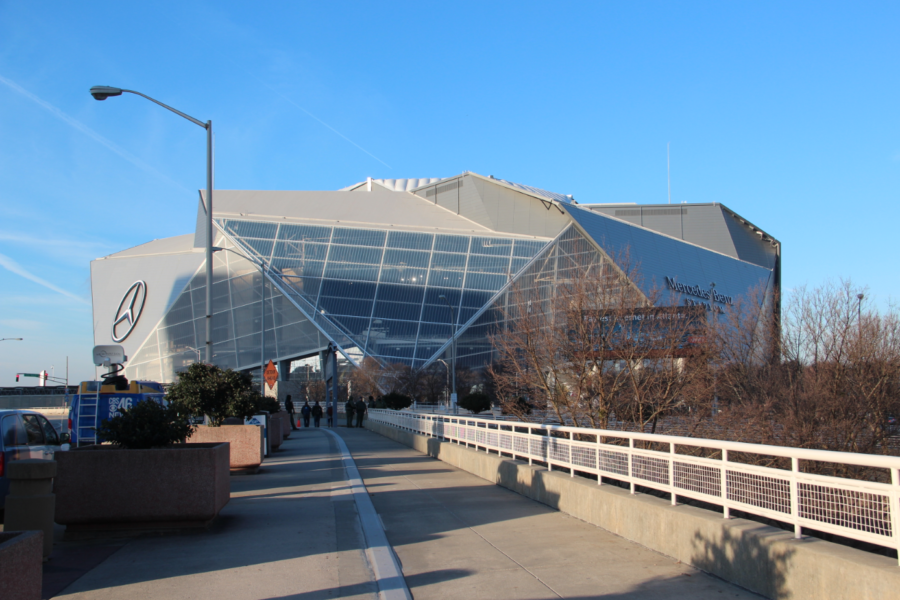 The Mercedez-Benz Superdome, where Super Bowl LIII was played.

In the 2019 Super Bowl, the New England Patriots defeated the Los Angeles Rams 13-3 in the lowest scoring game in history.

At the start of the game, the Rams struggled to get the ball moving with 8 punts in a row and less than 50 yards total. On the other side of the ball, the Patriots were able to get first downs and yards but few points, including a missed field goal. The Patriots were able to sustain a drive in the second quarter to set up a 42-yard field goal for Gostkowski. Going into the second half of the game, the Patriots led 3-0.

The halftime show included Maroon 5, Travis Scott, and Big Boi. Maroon 5 had the most air time with hit songs such as “Harder to Breathe,” “This Love,” and “She Will Be Loved.”

Late in the third quarter, Ram’s offense played a ten-play drive. However, the Rams had a holding penalty that forced them into a field goal, making the score 3-3. Two possessions later, the Patriot’s offense gained 67 yards and a touchdown run — the first touchdown of the game.

The Rams were able to move the ball to the New England 27, but were then intercepted. Up 10-3, Patriots needed to drain the clock or score any points to make it a two-possession game. The Patriots were able to get into field goal range by only running the ball and made a 41-yard field goal, virtually winning the game.

Both the Rams and Patriots qualified for the Super Bowl through overtime wins with controversial calls. In the Saints versus Rams National Football Conference (NFC) championship game, Drew Brees threw a pass downfield on a third down, but the receiver, Tre’Quan Lewis, was hit by a defender before the ball reached him, resulting in an incomplete pass.

Roger Goodell, the National Football League commissioner admitted it was a mistake for the referees not to throw a penalty flag as this should have been pass interference, and a correct call would have likely given the Saints a victory.

The Patriots narrowly defeated the Chiefs with one highly questionable penalty from the referees. Down 17-21, Tom Brady threw an incomplete pass that would have made it a third down except there was a roughing the passer penalty. In the replay, Chris Jones hits his hand on Brady’s shoulder pad, which is not against the official rule book. To the referee, it seemed like Jones hit Brady on the head, so the Patriots were rewarded 15 yards and a first down, helping them score a touchdown.

The Patriots and Rams did not play each other in the regular season; but, 17 years ago, Brady won his first Super Bowl against the Rams.