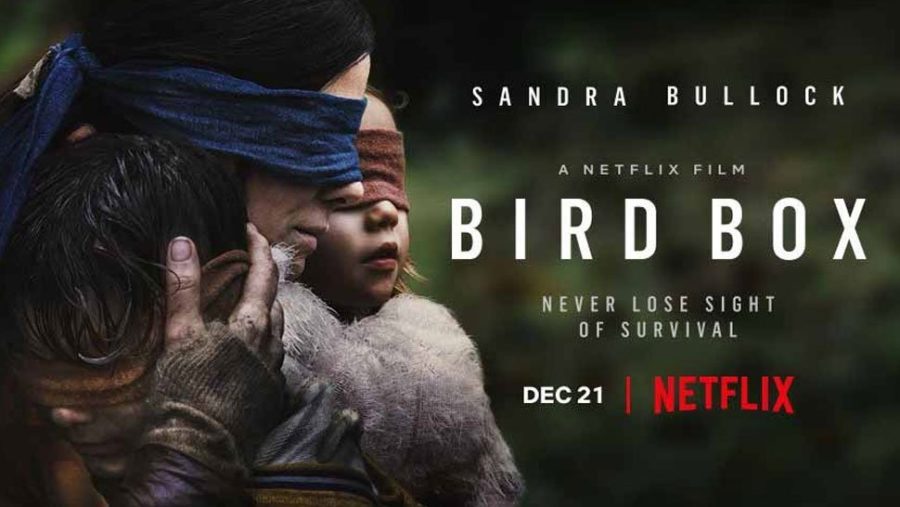 Bird Box is a science fiction and horror film that was recently released on Dec. 21, 2018, and is based off the 2014 novel written by Josh Malerman.

The film follows the story of Malorie, a pregnant woman played by Sandra Bullock, who is attempting to survive in an apocalyptic world where a super natural force causes an alarming number of people to commit suicide after they look at this force of evil.

The movie opens with playful banter between Malorie and Jessica where the audience learns that Malorie is pregnant. However, things quickly turn morbid as Jessica commits suicide soon after seeing a supernatural force in the middle of the road as they make their way back from Malorie’s doctors appointment. Malorie then takes shelter in a random house as the world is plunged into chaos.

There she encounters several people who aid in her survival and safety until she has her baby. The audience is introduced to Douglas, an older man who always seems to be carrying a shotgun, and a man named Greg who quickly dies shortly after his introduction. A young female police officer escorts Malorie into the house, where several other characters are seeking shelter: Felix, an EMT; Charlie, a store clerk; and Cheryl, an elderly woman.

The acting in this movie was absolutely outstanding. I was surprised that Netflix was able to produce a movie with so many talented actors. Bullock’s performance stood out to me the most, but the entire cast did an amazing job.

I was on the edge of my seat throughout the entire viewing, and I was too stressed to eat anything due to the pure shock I felt when new horrific details were revealed. However, after watching the movie a couple more times I started to notice several plot holes.

Perhaps details were intentionally left out to hint at a sequel or maybe the director wanted us to ponder our own theories and ideas. Regardless, the audience never learns where these “creatures” came from, if there is a way to get rid of them, or why some people can survive looking at them. I hope that all these questions will be answered sometime in the near future, but for now I am only left to wonder.

All in all, if you are looking for a fun and eerie time with friends and family, I suggest watching this Netflix Original.