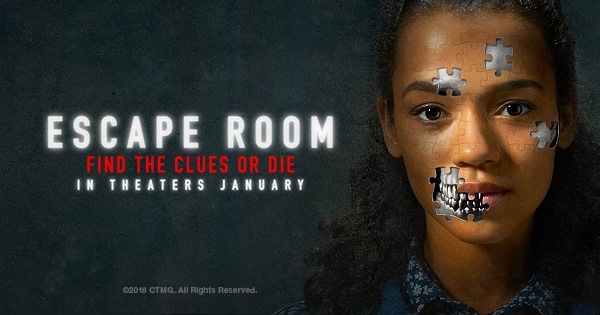 Escape Room is a thrilling, fear-inducing movie that follows the perilous situation six young adults have been mercilessly pulled into.

One day, Ben, Zoey, Amanda, Jason, Mike, and Danny receive mysterious packages that contain invitations to Minos Escape Rooms, advertising their newest, most “immersive” puzzle yet. Personally, I would not attend a random escape room — especially one that is advertised in such an ominous way — but the $10,000 award upon completion is enticing for these characters.

At first, the adrenaline of solving the puzzles is exciting and fun, but the game quickly turns dark when the six realize what is truly at stake: their lives.

Right from the beginning, the audience is introduced to many different and unique characters — some lovable, and some, not so much. The character models are unique when it comes to backstories and personalities, and the diverse cast makes the plot line more intriguing since almost everyone can relate to at least one character.

In my opinion, the whole introduction to the movie — a scene that later happens again, mostly from a varied point of view — made the remainder of the film a little tedious. Although giving away something that majorly impacts the rest of the movie at the very beginning is common, giving away the possible only sole survivor right off the bat was a little frustrating. I was still curious to see how the character ended up in that specific situation, but once the plot of the movie really took off, it was hard to forget that I already knew what would happen.

The entire plot is not the most original — “escape” has been a constant theme in many, many movies for years now — but the way the actors and actresses performed brought a new life to such a stereotypical, overused theme.  The way each role was portrayed by the actor simply took the script-writing to the next level. In my opinion, a bland actor tends to directly translate to a bland film and experience, but that was not the case for Escape Room.

As the characters took on progressively harder challenges, they developed as people, which was extremely interesting to watch unfold. People say that one’s true nature is revealed under stress, and this movie definitely put that idea to the test. It simply left me to ponder what I would do in their situation, adding to the psychological horror aspect of the entire situation.

Ultimately, I would definitely recommend this movie if you are looking to watch something intense, dramatic, and psychologically scary.