New Government Policies Cause an Uprising in France 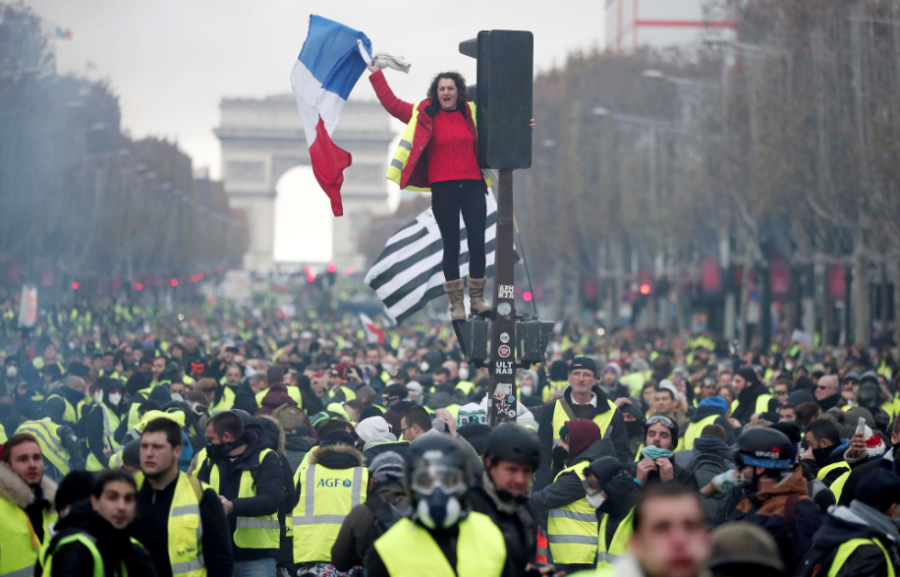 A woman waves a French flag in Paris during the protest of the French government's new fuel tax.

For the past three weeks, thousands of French citizens have taken to the streets of France’s major cities in protest of the government’s tax hike on fuel and other French policies.

President Emmanuel Macron returned to France after the G-20 summit meetings in Argentina and addressed the rising tension. An emergency security meeting was held in light of the mass civil disobedience. Security forces were deployed, but the French government has not declared a state of emergency.

The protesters were nicknamed “yellow vests” due to the yellow safety vests they wear. The protests peaked over the weekend of Dec. 1, and the French Interior Ministry estimated that about 136,000 protesters joined the nation-wide rebellion.

Macron announced the green tax on fuel last month as a part of his administration’s environmental policies. The French government claimed the fuel tax would help the country reach their goal of becoming a carbon neutral country by the year 2050.

The majority of the protesters are blaming Macron for the rising tax. Demonstrators believe Macron does not acknowledge the middle and lower classes but favors the rich. During his first year of presidency, Macron approved a $3.2 billion tax cut for the rich and slashed France’s wealth tax.

In Marseille, an 80-year-old woman was hit and killed by a tear gas canister shot through her window during protests. Another three people were killed in the protests. The mayor of Paris, Anne Hidalgo, estimated the protesters have caused nearly $5 million worth of damage to the city of Paris.

French Prime Minister Édouard Philippe announced Tuesday, Dec. 4, that implementation of the fuel tax will be suspended due to the nation’s unrest.

Update: Macron’s government has stated that the tax will no longer be included in the 2018 budget. Also, Macron has agreed to raise minimum wage by €100 ($113.72) a month to appease protesters. However, protests are still taking place throughout France.