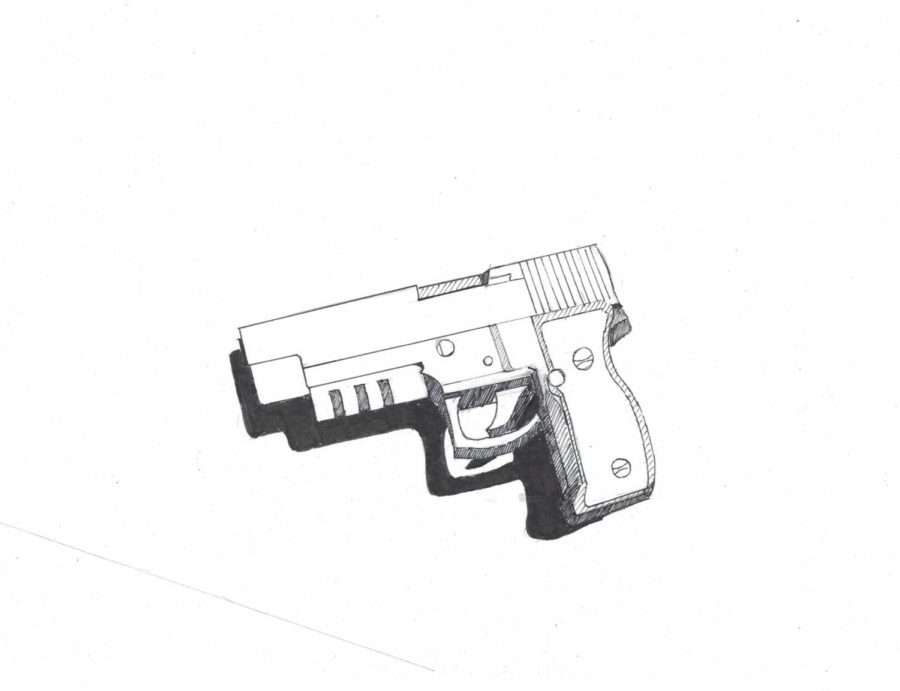 A picture of a gun illustrated by Cassie Tran, staff writer.

After each school shooting, there comes a short-lived period of time in which politicians and citizens alike attempt to solve the issue of gun regulation; however, we must focus on controlling the distribution of guns rather than resorting to outlandish solutions.

Over the past decade, America has seen a significant rise in the number of deaths caused by uncontrolled gun regulation. One of the most memorable shootings happened on Feb. 14, 2018, at Marjory Stoneman Douglas High School in Parkland, Florida, where 17 innocents, including a teacher and an assistant football coach, were killed.

As these shootings become increasingly common, many families and students are taking action, demanding more gun control in America. For example, following the Parkland shooting, petitions and school walk-outs were seen across the nation.

“I am not comfortable sending my kids to school knowing that they might not come back. I shouldn’t have to feel like my kids are in danger while they are at school,” said Karim Saeed, a father of three. How long will we have to live with the fear that our children might get killed in a place dedicated to learning and education?

“We have become numb and emotionless to killings that happen in non-combative settings like schools,” said Stacy Hustedt, a mother and a public relations volunteer.

I agree with Hustedt since, in previous years, many mass shootings have occurred in school settings. The issue of guns must be addressed not through grief, but rather through new bills that will protect student’s lives while simultaneously maintaining the Second Amendment.

Recent tragedies have proven that we need to increase the security in schools in order to better protect our students. The government should also require more paperwork before allowing citizens to purchase a firearm.

The National Rifle Association (NRA) is one of the major nonprofit organizations in support of gun rights. The organization has proudly voiced their support of the Second Amendment, banning background checks on people attempting to purchase a gun, etc. They have also interfered with the government’s position on gun control. The NRA has advocated gun use by advertising military weapons that are now in the hands of the general public with limited restrictions.

In 2018 alone, an estimated 113 students have died as a result of school shootings. In 2012, a class of 20 first-grade students were killed by Adam Lanza who used two guns that are classified as military-style weapons. Citizens should strongly stand for gun control and safety in schools above all else.

In Mexico, general citizens have the rights to own guns; however, very strict restrictions are placed on the exchange. These regulations have lowered the amount of deaths to 8 since Jan. 1, 2009. While the United States has suffered 288 school shootings since 2009.

These numbers have the opportunity to decrease if America harshly supervises the use of guns and the amount of ammunition being dispensed to the general public. Japan is another example of a country who has guns but manages them strictly to keep its citizens safe. Japan’s government only permits citizens of a certain occupation to possess a gun; this completely eliminated school shootings.

Additionally, people must speak openly about gun control and understand that the lack of it will continue to have a negative effect on America. Shootings are horrible events that can be prevented. I advise others to speak out about the gun violence that has claimed the lives of many innocent people. Gun violence needs to end.