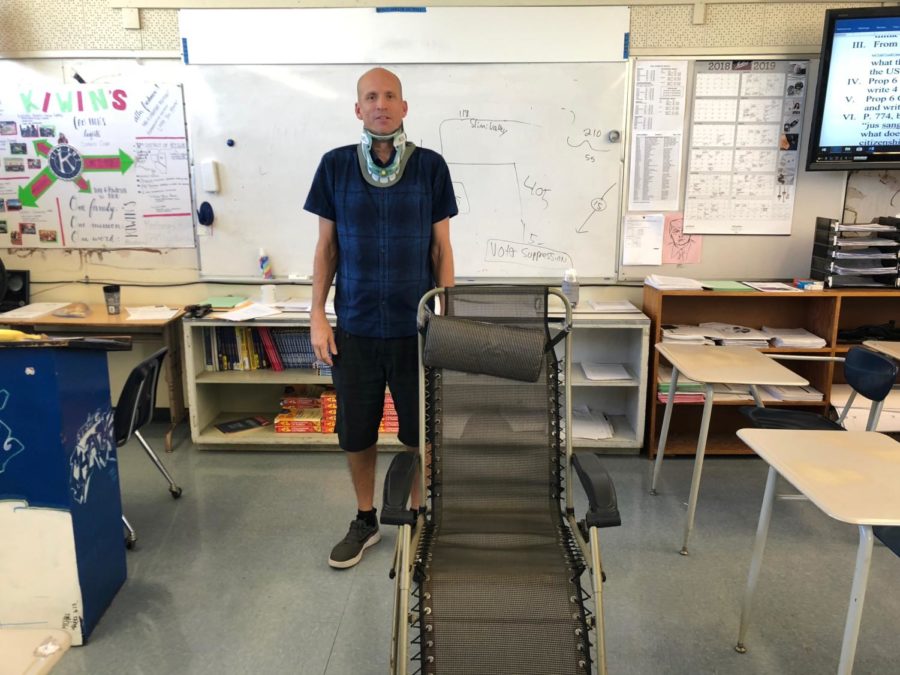 Mr. Quinn and his zero gravity chair in his classroom.

On Oct. 7, Quinn visited Faria Beach — located in Ventura County — with his family and some friends after the cancellation of school. Towards the last two hours of their time, Quinn and his wife went for a four mile run. After, Quinn grabbed his body board and headed into the ocean to cool down. When he entered the water, the waves were about six to seven feet and breaking quickly.

Quinn was having trouble catching a wave on his body board, and since he did not have fins, the process was more difficult. “I came into shallower water and I basically stood up about chest-deep water and tried to get on to a wave, and I pushed myself onto a wave by pushing against the bottom. About a split second later, as soon as I caught a wave, I heard a ringing sound in my head, and I noticed that I basically smashed my head into the shallow water. So it was kind of like a human dart,” said Quinn.

Upon getting up, Quinn tried to figure out if he had suffered any nerve damage since he was experiencing pain. He did not feel any numbness or tingling, which he considered a good sign. Shortly after, he received help from his family and friends, and headed to Community Memorial Hospital’s emergency room.

“First, I was in pretty acute pain. I was definitely worried if it would be a life-changing injury, and whether I would recover fully or to what extent. For me, I was worried about what I would be able to do, keep my job, be able to support my family, hold and lift my kids,” said Quinn.

Quinn said he will likely not regain full neck mobility, meaning he will have some impairment in terms of turning or raising his head. However, as long as he can rest periodically on his zero gravity chair for a few minutes every hour, he will not be in pain.

Friends and colleagues have been supportive of Quinn and his family. At first, he refused the help, because he did not feel it was necessary. Eventually, Quinn began to accept the aid of others. “There are four or five teachers on this campus, and four or five other teachers and [classified] staff, as well, who basically came to [my] house and brought food during the course of the first week of my injury.” Quinn is grateful for the help that his wife received as she has to care for their three children.

Quinn wants others to learn from his from his experience. “Actions have consequences. As you think about what you do as a teenager, it wasn’t that I was doing anything inherently stupid or dangerous, but I would definitely say that people should think about what consequences their actions have and at what age they want to start a family,” said Quinn.