A Review of Halloween Horror Nights at Universal Studios 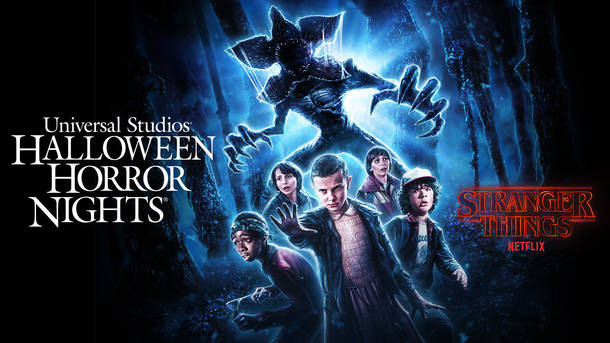 Halloween and the fall season bring many joyful things like colder weather, pumpkin carving, tasty treats, and vibrant colors, but the season can also bring fear. Some people choose to avoid fear but others crave it. From mid-Sept. to the start of Nov., brave adventurers flock to Universal Studios Hollywood to attend the theme park’s annual Halloween attraction, Halloween Horror Nights.

Halloween Horror Nights consists of seven different mazes, the Terror Tram, and five scare zones where actors are dressed as horrific creatures in an attempt to scare attendees. Each of the mazes and scare zones are based on different films or shows related to the horror genre. This year’s theme is centered around the Netflix original television show, Stranger Things. The event starts at 7:00 P.M and early entry is 5:00 P.M.

I arrived at the park — with a group of friends — at around 5:30 P.M. and the lines were still fairly short. We headed directly to the highly anticipated Stranger Things maze in hopes that the wait would not be long. We spent no longer than ten minutes in line before we entered the maze. It was housed inside of a soundstage that made it more unique and surreal. Although the scares were somewhat repetitive, the theme and overall design of the maze was outstanding. It was a brilliantly immersive experience and I genuinely felt like I was in the Stranger Things universe.

As the night went on, the lines grew longer and the atmosphere of the park began to feel more like Halloween. We went on to experience more mazes in the lower studio lot of Universal Studios. Trick ‘r Treat, The First Purge, and Poltergeist — all named after films — were a few of the mazes in the lower lot. Unlike the Stranger Things maze, these attractions had a larger variety of scares and performers.

One highlight was during the Poltergeist maze when an over-sized skull lit up from the dark corridor and swung toward us on a rope. I also appreciated the use of smell pods to make specific rooms in the mazes smell like different things. Especially in the Trick ‘r Treat maze, the smell pods expertly matched the overall vibe of the maze.

My biggest complaint for this year’s Horror Nights is the lack of actors within the scare zones. In previous years, there were countless performers wearing spooky outfits within the designated scare zones. This year, however, they were sparse, and Universal failed to provide the hectic and terrifying atmosphere normally seen in these areas. In fact, the park as a whole felt slightly less Halloween-spirited and this may have been due to less blaring music and a calmer ambiance.

The Terror Tram was also lacking. Although there were some scary moments, I felt it was a bit lackluster overall. The theme of the maze was “Hollywood Harry’s Dreadtime Stories” which revolved around a murderous clown and his bloodthirsty circus companions. With a topic as popular as killer clowns, it felt like a missed opportunity to make a highly immersive and terrifying experience.

We ended the night with the maze based on the movie Halloween 4: The Return of Michael Myers. This attraction turned out to be my favorite as I received the most amount of frights walking through the maze. With a new movie in the franchise coming out, Halloween (2018), the line for this maze was long; however, it was worth the wait.

Overall, I thought the entire experience was worth the price of $97. Universal Studios provides the best Halloween experience in the Los Angeles area. There are areas for improvement, but the event still provides for a great time, especially when enjoyed with friends. I will certainly be looking forward to attending next year’s Halloween Horror Nights.