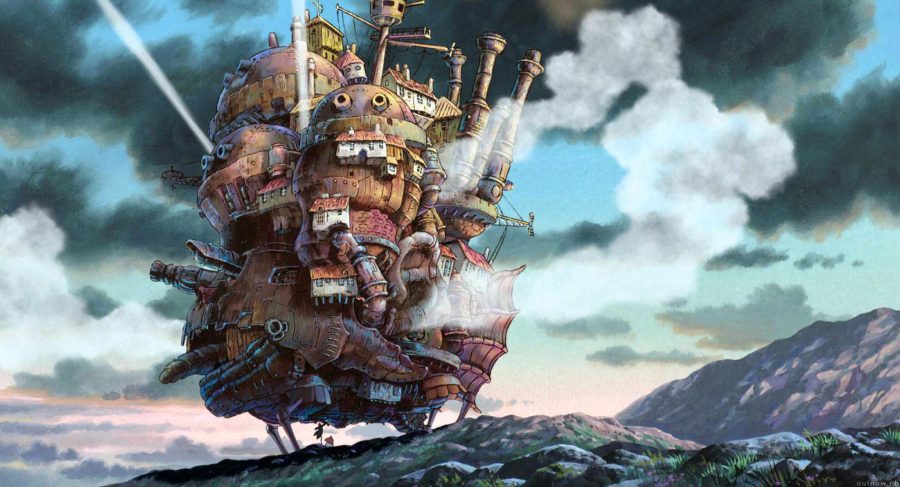 The medium of anime (Japanese animation) has garnered a lot of negative stereotypes from the American perspective. People who dismiss the genre as overly-violent and weirdly-sexualized may be hesitant to dip their toes into the metaphorical pool of the art form. In this third addition to Movie Mondays, I will attempt to shed a new light on past prejudices through the beautiful and inspiring art of the film Howl’s Moving Castle.

Due to its overwhelming critical acclaim, I originally intended to write a review on another Hayao Miyazaki film, Spirited Away, which won an Academy Award. However, the establishment wherein I rent films did not have this particular movie. And yes, to all of you snickering in the back, I still rent movies the old-fashioned way. Instead, Howl’s Moving Castle caught my eye.

I’ll admit that I may be a little biased in writing this review, as I’ve been on a sort of anime-craze for the better half of this year ever since a friend recommended the genre to me. I’ve enjoyed all that the genre has to offer so far, and I’ve never met an anime TV show I didn’t like. Consequently, I may look upon this particular selection with fonder eyes than others. However, judging by all the praise this film has already garnered from other critics, you don’t have to be an anime-lover to like the film.

The plot for Howl’s Moving Castle sounds like any Disney film you can think of when you put it into words, but in reality it is anything but banal. Absent is the traditional structure found in most animated features, and replacing it is a story that takes so many twists and turns that it is hard to pin down the plot flow. I think Miyazaki himself said it best with: “To have a film where there’s an evil figure and a good person fights against the evil figure and everything becomes a happy ending, that’s one way to make a film. But then that means you have to draw, as an animator, the evil figure. And it’s not very pleasant to draw evil figures.”

Any sufficiently short summary of this film, done for the purpose of a review, would not do the film justice. However, I know that to talk about the film without at least giving a quick plot summary for those who haven’t seen it would be foolhardy, so I’ll try my best.

Sophie (Emily Mortimer), a girl who lives a plain life as a hat-maker, is cursed by a witch to become an old lady. Seeking a way to break the curse, old Sophie (Jean Simmons) seeks out the wizard Howl (Christian Bale) in his castle that walks around on four legs. Along the way they have various adventures and meet many humorous side characters.

My reactions to this film are mixed. Howl’s Moving Castle is not the typical type of film that I enjoy watching. That being said, this film was extremely well done.

First of all, the animation in this film is nothing short of breathtaking. When you look at a character’s hand or face, it is not smooth and featureless like many Disney films, but instead you can see the veins and wrinkles in a much more realistic fashion. The rest of the film’s animation is a study of complements, with the hard black and red hues used for all the war scenes contrasting with the lighter pastels of the towns and countryside. I must also mention Howl’s castle which is simply a joy to look at, inside and out. It is so thoroughly strange with its outside appearance, yet it feels cozy on the inside.

The best way that I can think to describe this film is if a Disney Princess film were less bland and predictable. Again, Miyazaki said it best with, “I think 2-D animation disappeared from Disney because they made so many uninteresting films. They became very conservative in the way they created them. It’s too bad. I thought 2-D and 3-D could coexist happily.”

I watched the English-dubbed version of the film, and I don’t know if I was supposed to or not. Many anime fans are vehemently against any English dub, as they believe it takes away from the original Japanese version’s majesty. In many cases, this is absolutely true; however, in this case, I had no major complaints with the voice acting. Although, it was a little hard to hear Bale’s voice and not think of his character spouting lines from his Batman role. It made me chuckle a little imagining Howl yelling, “Fear Me!” or “I am the darkness!” in Bale’s famous Batman voice.

All in all, Howl’s Moving Castle is enjoyable, artistic, and beautiful, if you enjoy the love-story genre. However, if you are a fan of the more violent and action-filled, but still thoughtful and well-done, anime (as I am), I recommend giving this film a pass and watching something like Akira instead.