Education Is a Right, Not a Privilege 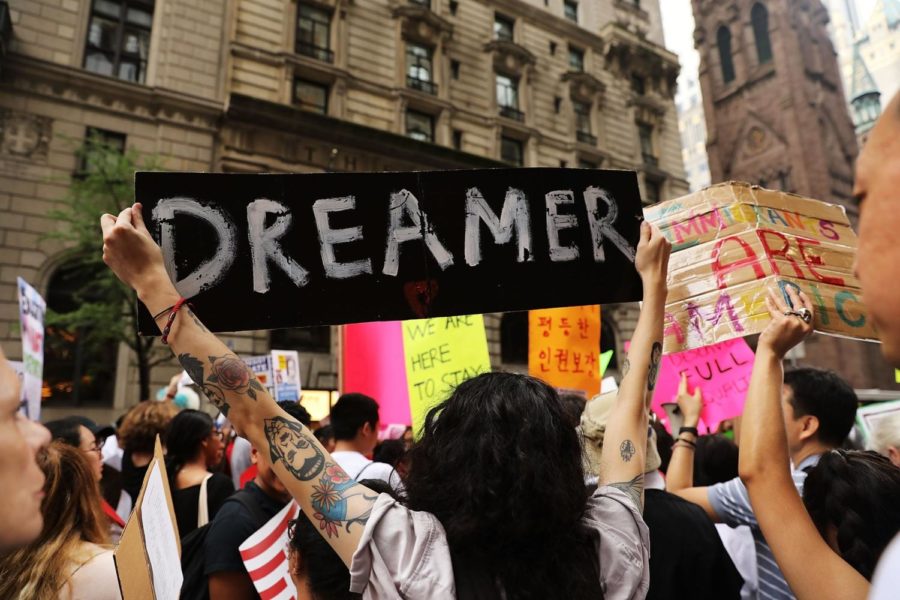 provided by: https://www.popsugar.com A protester holding up sign that says "DREAMER."

As the school year comes to a close and graduation is upon us, seniors are often posed with the question, “What college are you attending?” It may seem like a harmless question, but what countless people are not aware of is the conflict some seniors go through, especially those who are undocumented immigrants or recipients of DACA.

For many immigrants, community college is a cheaper alternative and a viable solution for students who cannot afford the hefty cost of a four-year university. However, while being a cheaper option, community college is often looked down upon, particularly when others believe the applicant can strive for more. Sometimes, the student can achieve more, and is held back not physically or mentally, but legally.

America continues to struggle with the topic of immigration. In 2012, President Barack Obama passed an executive order to form the Deferred Action for Childhood Arrivals (DACA), which granted safety against deportation to undocumented immigrants who arrived in the U.S. under the age of sixteen. These “Dreamers”, as they are referred to, are also granted work permits, driver’s licenses, and other basic rights.

Blame and hate are often placed upon the shoulders of these Dreamers, but more often than not, their arrival was not their decision, but the decisions of their parents.

Undocumented immigrants have garnered a bad image created by the current government and various media outlets. Many of the statements made by the current president are misconceptions. For example, the application to be a DACA recipient is very selective.

To be eligible for DACA, the applicant must “not have convicted any felony, significant misdemeanor, or three or more misdemeanors, and do not otherwise pose a threat to national security or public safety,” (wiki). Applicants must also have a high school diploma or an education equivalent to a GED. This process can take at least 90 days, if not longer.

Even then, not all ways of life are readily available to students registered under DACA. Qualification does not permit federal scholarships for college, which holds many undocumented students back since they lack the funds, according to studentaid.gov. Undocumented students covered by DACA can freely study in any university, but payment is a significant issue.

Countless undocumented students come from families of poverty, which is yet another obstacle that these young adults must face. Not to mention, many parents of Dreamers are undocumented and have been applying for citizenship for both their children and themselves for years, with some applications taking decades before simply being filed.

Dreamers may end up unprotected as President Donald Trump has made the decision to repeal DACA. This affects about 800,000 individuals nationwide, some of which are in our own school and city. About 122 individuals will lose their DACA protection if it is disposed of.

The future of these current graduates is in the hands of the government. Their safety and stability has essentially been terminated or currently remains in an elusive state. DACA has shielded these Dreamers from deportation, and it has granted them almost an equal opportunity to their privileged counterparts.

I, myself, am not a recipient of DACA, but countless people I know are. One of my closest childhood friends came to the U.S. from Mexico when he was only a year-old. His parents sought to give him a better life and the “American Dream.” When they first arrived in America, his father worked three jobs, and his mother worked two in order to support their family.

Immigrants come from all over the world, not just Mexico. Another friend of mine, who I consider as close as family, is undocumented and came here from the Philippines.

Many people are skeptical of his story and they often ask how he managed to illegally arrive here. His family overstayed their visa when he was only four in order to escape the poverty and danger in their hometown of Manila. DACA has protected him from deportation and granted him a job to help sustain his family, which consists of seven people.

The current state of our government creates an uncertainty of what the future holds for DACA recipients, as well as undocumented immigrants. Will they be protected or abandoned?

Many Americans do not agree with the methods by which some enter our country, but most immigrants enter America to simply search for a life with better conditions for their families to thrive in. We are the home of the brave and land of the free, are we not? A piece of paper should not dictate the worth of an individual or what they can achieve, rather the will they have to get there matters most.