Bees On Campus Cause Quite the Buzz 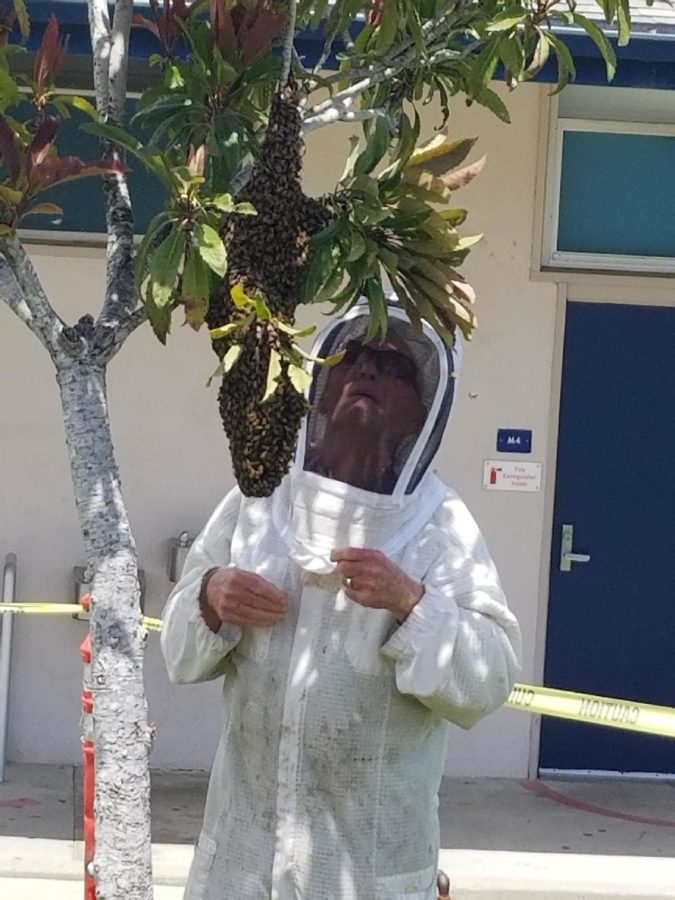 Bill Weinerth examines the bee hive prior to removing it from Cam High's campus. Photo courtesy of Karen Chadwick

A bee hive was found between the M-building and the tennis courts on Cam High grounds, on May 7. The bees were removed and transported to a safe environment by bee keeper, Bill Weinerth, who was hired by the Oxnard Union High School District.

The bee hive was found by students in Physical Education and reported to the administration on campus. No students were stung by the swarm of bees. Assistant principal, Ms. Karen Chadwick, followed through with the bee hive removal and rehabilitation.

Weinerth was hired by the district to remove the bee hive. He is now currently 78-years-old and raises his own bees. The bee hive has been transferred to his property safely and carefully through a multi-step process. The swarm will continue to grow and raise queen bees so that additional hives that lack a queen can be saved.

“Once they raise these larvae, they’ll keep separating the bees and raising new queen bees to create more colonies of bees with queens since bees are endangered and dying out,” said Chadwick.

In the past two decades, environmental organizations and scientists have noticed a 90 percent decline in the bee population, so preventative measures were implemented by the United States Fish and Wildlife Services. In Oct. 2016, the rusty-patched bumble bee was the first type of bee to be added to the Endangered Species List, gaining federal protection and funds for studies to be conducted on the cause of bee deaths.

Bees play a vital role in pollination. According to a study published by Cornell University, $29 billion of the farm income in the United States comes from the pollination of honeybees. “Bees are very important to us, about one-third of the food we eat depends upon honeybees for pollination,” said Weinerth.

Countless studies and experiments have been conducted to solve the mystery of the disappearing bee population. One of the more acknowledged theories is known as Colony Collapse Disorder (CCD). CCD occurs when worker bees in a hive disappear and leave behind a queen. Without the majority of the hives support, the hive cannot function properly resulting in a ‘collapse’ of the hive.

However, there are various other reasons as to why the bee population is drastically declining, but without the proper research, scientists remain in the dark.

Pesticides are also contributing to the death of hives, and are sometimes mistaken as CCD. If a pesticide is not used properly, bees can come into contact with the pesticide resulting in acute pesticide poisoning. A pile of dead bees can be found outside the hive if the bees have been exposed to these harmful chemicals.

The U.S. Department of Agriculture has formulated an action plan in order to conserve the bee population and learn more about the causes of CCD. The United States Environmental Protection Agency (EPA) is working to advance research and investigation on the effects of pesticides on the bee population.

In recent years, the bee population has risen somewhat, but a select few species remain on the Endangered Species List.