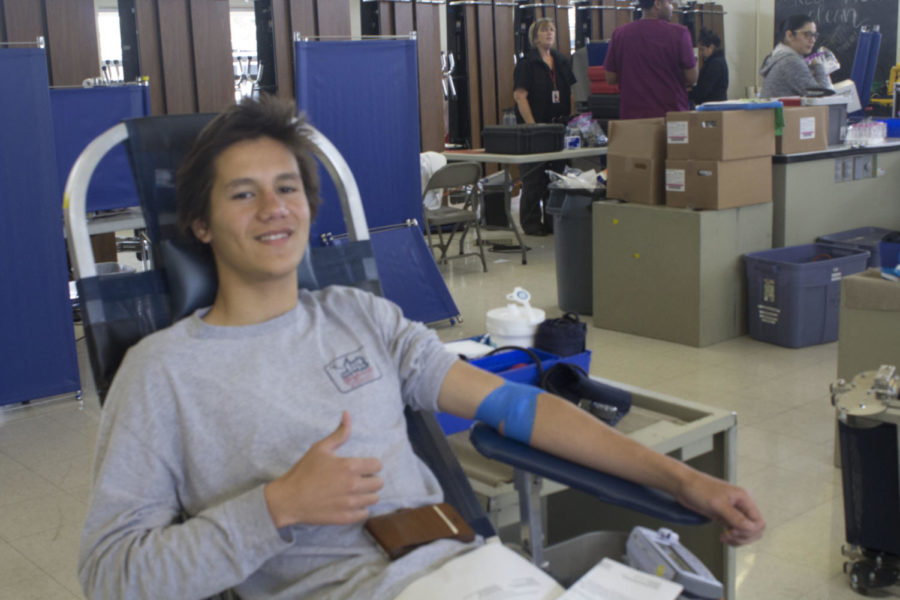 Cam High’s bi-annual blood drive was set up in the cafeteria this past week and took place on May 1st and 2nd.

This year, Cam High had 187 donors, with the typical amount of donors at Cam High being 150-200 participants, according to Ms. Mary Harris, Cam High’s nurse. Cam High is designated as a tier one school by the United Blood Service because of how large the student body is. In competition, Cam High won two $2,000 grants these past two years for its large pool of donors. These grants have been used at Cam High on various expenses like lock-down toilets to benefit the school’s needs.

Nurses and phlebotomists, people who draw blood, believe that it is very important that people start participating in blood drives at a young age. Jason Mcclell, a phlebotomist that worked in the blood drive at Cam High, said, “I think if we can get [younger people] to start donating blood early [they’ll] make it a regular, frequent thing, as opposed to donating later on in life and then only donating once every year. If we get [them] started young, [they] will keep donating to those in need regularly.”

“I think giving blood is self rewarding. I think that it’s good that young people get to do something and not get rewarded for it. It’s a personal award, it’s a selfless act,” said Harris.

There are various components to being eligible to participate in the annual blood drive. In order to donate, participants must be at least 16 years old. A person’s height, weight, plasma complex, and various other components are also taken into consideration. After donating five units of blood, students are eligible to earn a cord for graduation. Students who can’t donate blood but still want to help out can volunteer at the blood drives in order to still receive the chord, which is called the ferritin letter.

Many students expressed their excitement to participate in the blood drive. “I think it’s really important. If I can contribute to helping somebody else out, why wouldn’t I? And there’s a demand for it, you know? It’s something that I can give that won’t affect me,” said Selena Starks, senior.

Michael White, sophomore, said “It’s good to help other students when there is a bigger cause.”

The blood drive benefits the community by delivering the units of blood to local hospitals and institutions. When the blood has been sent to a destination, the participant receives a text that states where it had been sent. Gabriel Wasylewski, senior, said “I know that other people need blood so I’m trying to save lives.”

Selena’s advice to people who may be hesitant to donate blood was that “it’s worth it. It’ll be over quickly and it’s worse in your head. If you do it, you’ll feel good knowing that you helped somebody.”