Civic Learning Leads to an Award of Distinction 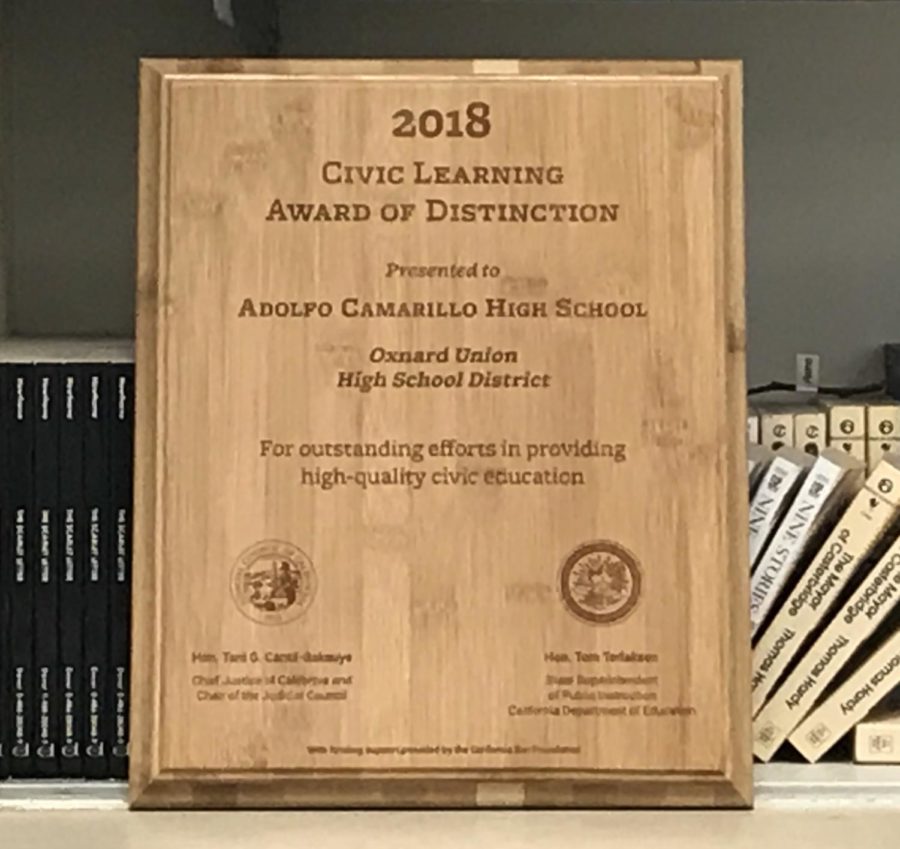 Cam High is one of the 74 public schools throughout California to receive a Civic Learning Award, given to schools who engage students in civic learning.

For the 2018-19 school year, Cam High submitted an application that highlighted three programs at Cam High: the Associated Student Body (ASB), Junior State of America (JSA), and AP European History. The California Department of Education decided what schools to recognize based on several aspects: the genuine effect and expansion of civic learning in classes, clubs, and programs.

“These schools provide great examples of how to creatively and effectively teach civics to our students,” said State Superintendent of Public Instruction Tom Torlakson, according to the California Department of Education.

About two years ago, Dr. Kim Stephenson introduced the organization to various teachers around the school, prompting clubs and organizations to apply for the award. The German Exchange Program, Naturally Green, and Junior State of America (JSA) submitted applications in the 2016-17 school year. The three clubs received an award of Merit, the third highest award, given out to 47 other schools.

Cam High was acknowledged with the second highest award: the title of Distinction. Schools that earned the Distinction award were visited by an appellate court justice and received a plaque, as well as an invitation to California School Recognition Regional Awards Ceremony on May 1. Six additional schools also received an award of Distinction this year.

ASB has created various opportunities and programs that establish a sense of community at Cam High. Some examples include: student of the week, athlete of the week, the tireless teacher award, and actively participating in the walkouts at Cam High.

AP European History includes students from diverse social and academic backgrounds. All students are encouraged to participate in the classroom and apply the information to real life.

“I feel it is my duty to have students engaged in as many ways as possible because the reality is that students probably won’t remember the content, but they’ll remember the vibe, the atmosphere, the environment, the tools, and just the connection to life. Making it relevant and meaningful matters because they have to be here so let’s do this and make it meaningful,” said Safran.

JSA was recognized mainly for the club’s participation in urging students to register to vote, their anti-apathy campaign, and discussing political and social issues in class.

“[Teachers are always searching for] what we could be doing to further awareness and further opportunities for you guys to not only learn about, but even participate and practice some of these basic ideas of civics,” said Near.