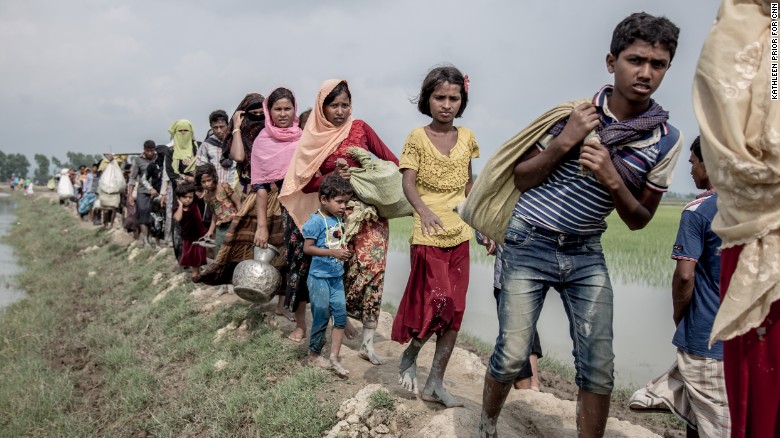 Myanmar’s military forces and Buddhist mobs began persecuting the population of Rohingya Muslims in Aug. 2017, causing an estimated 680,000 to flee their home country.

The Rohingya’s villages were burned to the ground by military forces and soldiers traveled to each home, shooting women, men, and children. The actions of the military are now under inspection by the United Nations for genocide. Genocide is defined by the UN as acts committed with an intent to destroy, in whole or in part, a national, ethnic, racial, or religious group.

The Rohingya represent a large portion of the Muslim population within Myanmar (formerly Burma), with an estimated one million living there in the year of 2017. For decades, the Rohingya and Buddhist people have been wary of one another and when tensions run high, normally triggered by an act of crime against the other, regular acts of violence occur.

United Nation (UN) officials believe that the government’s behavior resembles “ethnic cleansing” as UN investigators visited the growing and crowded refugee camps in Bangladesh where investigators heard accounts of killings, torture, rape, and arson. Recently, Myanmar’s government has ordered the remains of the villages to be bulldozed, wiping away evidence of mass graves that are crucial to the UN’s investigation.

Many of the groups in power are against the presence of the Rohingya people. The Rakhine Nationalities Development Party (RNDP) — stationed in Myanmar’s second poorest state, Rakhine — holds 18 seats in the state assembly and 15 in the national parliament. The RNDP supports a law, written and established in 1982 by military ruler Ne Win, that declared the Rohingya people stateless and put strict limitations on jobs, marriage, housing, etc.

Additionally, Myanmar’s government has denied any involvement in the destruction of Rohingya villages, saying that their military has only targeted men that are suspected to be involved in an attack that killed 12 security officials in Aug., last year. The State Counsellor of Myanmar, Aung San Suu Kyi, has refused to condemn or intervene with the attacks on Muslim people, believing that violence has occurred on both sides.

Several thousand Buddhists are also housed in refugee camps after Muslim mobs had destroyed or burned down their homes.

About 700,000 Rohingya have fled to Malaysia, Indonesia, and more than 500,000 people are being housed in Bangladesh. However, Bangladesh can no longer take in refugees due to a strained resource supply, and the government has arranged to send them back to Myanmar if they attempt to cross the border.