Walking Out on Gun Violence 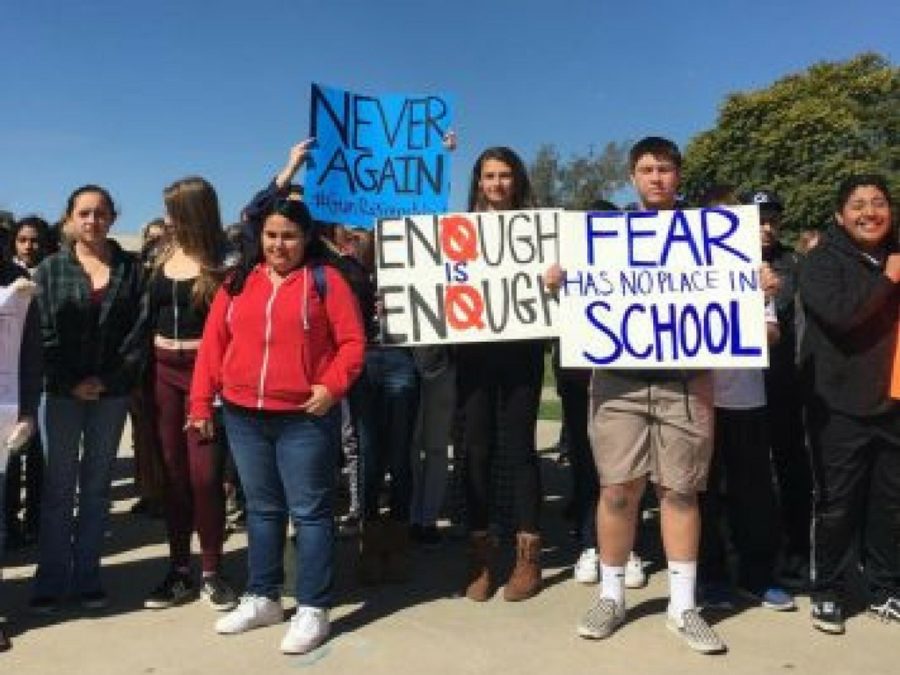 Photo by: Jack Young A group of students walk out of class and gather at the stage to protest the recent gun violence.

A group of students at Cam High held a “walk out” for political reform on gun regulations. The event was set for Feb. 21 at 12:00 pm.

“We’re protesting guns violence, the use of guns around America, and the many deaths they have caused,” said Carmela Rogers, senior at Cam High. “Especially mass shootings. We’re mostly protesting because of the shooting that happened recently at the school in Florida.”

The crowd assembled at the front of the school, and proceeded to march around the front, back toward the J wing, and turned right to make their way toward the quad, where they gathered on the stage.

Sarah Foote, junior, coordinated the event over social media after she saw tweets from Florida high school students organizing a similar event. “I started out by retweeting it and posting it on Instagram and my Snapchat story,” said Foote. “People started asking me, ‘Are you actually going to do this?’ And I told them yes, I’m going to, and I hope that other people will join me too. Word spun around, people were retweeting it and posting it on their stories,” said Foote. Foote’s leadership helped to rally a wave of students that filled the hallway, spanning from the J wing to the K wing.

Cam High’s administration, adhering to OUHSD policy, told teachers that all students who left their classrooms during fourth period were to be marked absent without excuse, since the walk-out was organized hastily and not planned by the school.

AP Government teacher, Mr. Chris Quinn, had heard of walk outs across the nation on the news, and encouraged conversation among his AP students. “I asked my students to see what they could find. Were there any local Twitter feed that has students doing any kind of local organized protest? Because if there is, this is a government class. We should be talking about it.”

When asked for his view on the student walk out, Quinn said that he is “encouraged and disappointed. On the one hand, I am encouraged because I like to see political protest, and political participation among students other than voting. [However,] I’m discouraged because I think they are naive. I think they underestimate how difficult it would be to make meaningful gun control legislation change.”

“I had a discussion about [the walk out] in class before it happened,” said Mr. Joel Groves, mathematics teacher. “I said, ‘You know, if you want to do it because you’re protesting gun violence or violence in schools, that’s fine. But if you’re just doing it to get out of class, don’t bother. Nobody wants you out there.’” Groves added that the next day, when he asked his students just how many of the participants were only walking out to cut class, they admitted that it was “about half.”

Mrs. Terry Donaldson, AP Studio Art teacher, is optimistic about the waves this protest will make in Cam High’s community. “My students are inspired. We are contemplating making postcards and sending them to our government officials to try and express ourselves. We are also trying to participate in some political art shows that I am aware of.” Donaldson said she “hopes that this movement will encourage the community to get educated and participate in our government for strong change.”

A school-wide walk out, sanctioned by Cam High officials and ASB, is planned for March 14. More information is forthcoming.