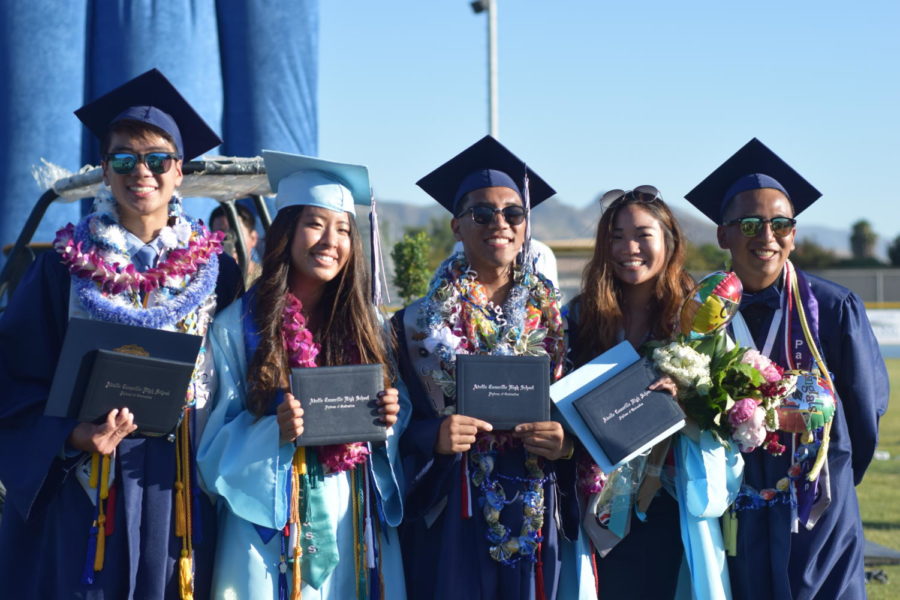 On Nov. 8, students had the option of voting for either navy blue or Columbia blue (Cam High’s traditional colors) during their homeroom classes. The following week, Ms. Lori Pristera, ASB director, announced during a House of Representatives meeting the winning color: Navy blue.

“I’m excited that the final color is the one I voted for,” said Adrian Valdes, junior.

While having to choose one color upset many students, being able to choose it and the final result pleased many.

“My math teacher, Mr. Groves, told my class that the [gown] color will be Navy blue,” said Audrey Creel, senior. “I voted for Navy blue and I’m glad that it is the final decision because I like the color more than the Columbia blue. I also like that we only have one color because it’s easier and allows everyone to feel accepted.”

Chandon Clay, junior, said, “Having one color is not traditional, but I’m excited that the color is Navy blue.”

Many students and former Cam High Graduates are frustrated and disappointed about the final color being Navy blue.

“I heard the final gown color decision from Mr. Dowden,” said Jenna Flynn, junior. “I voted for Columbia blue and I feel like my opinion doesn’t matter to the school. There should be two colors and if there’s a third party that doesn’t identify as a boy or a girl, then they could have a third color, instead of having everybody wear one color.”

“Mail me my diploma,” said Adam Ruiz, senior, in protest to the new policy.

Other students had an indifferent response to the unified gown color.

“I voted for Colombia blue, but I don’t really care that much,” said Luke Whitney, sophomore.

In response to controversial reactions from students, Dr. Penelope DeLeon, Superintendent of Oxnard Union High School District, said, “We have a number of students in this district that do not follow traditional gender norms. Therefore, we felt it was very important that we stand up for them and [treat] them as important students [through offering] one single, unifying color at each school.”

The reason for the change in the gown color tradition has been finalized by Dr. DeLeon. Though, the student body at Cam High seems to be divided over the issue.

The idea behind the single gown color is to make everyone feel comfortable walking in, and out, of graduation. However, the controversy of whether or not the majority should have to change for the minority still lingers throughout Cam High.