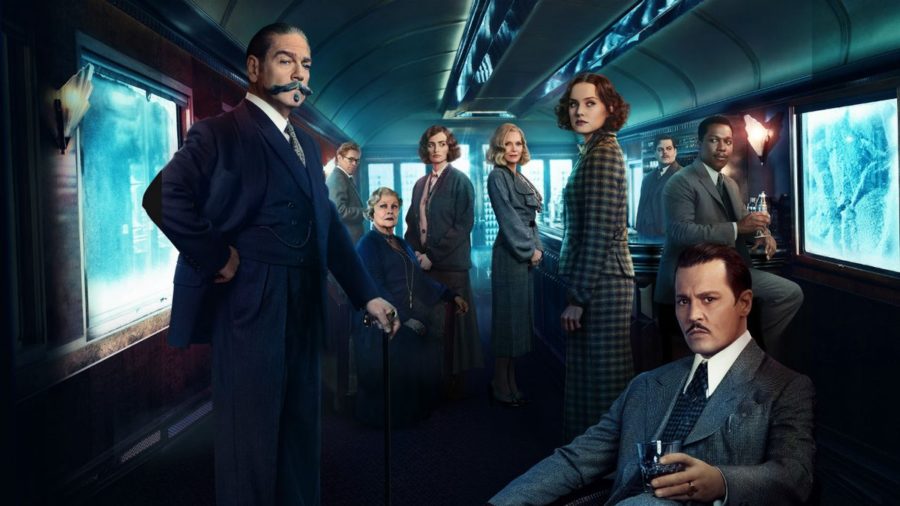 Murder on the Orient Express — released on Friday, Nov. 10 — is full of meticulous mustaches and mysterious murder. Set in 1934 on a train called the Orient Express, 13 suspicious passengers are stranded in a snowstorm when a murderer strikes. With an elaborate backstory and intertwining characters, the movie captures the essence of Agatha Christie’s book, while adding in bits of originality.

Intense close-ups call into question the veracity of the characters very beings, and I became enthralled in this thickening plot full of amusing characters. Details of the past were revealed as different clues were uncovered by the main character and self-proclaimed “greatest detective in the world,” Hercule Poirot. There was no possible way to solve this mystery without the clues given as the movie progressed, which, in my opinion, was quite an interesting way to reveal background information and the killer. Most movies (and books) in the mystery genre can be easily predicted, so when many of the situations and clues confuse the audience and decimate any seemingly solid theories I developed, I was both amazed and slightly frustrated.

Unlike the book, the movie opened in the midst of a chaotic scene involving a young boy in Jerusalem fetching eggs for Poirot. However, the detective rejected each batch due to their imperfections in size, as Poirot deeply dislikes the imbalances of life (a major reoccurring theme). Around him, all staff, soldiers, and general public appear in awe of the detective, and I quickly joined them, as Poirot effortlessly solved a mystery through an insignificant detail of a scratch made by a boot. Poirot then captured the culprit with the predicted placement of his cane and a single soldier.

On the other hand, Poirot was not all business. With scenes of him laughing (borderline giggling) at Charles Dickens novel A Tale of Two Cities, dodging Mrs. Hubbard with her never-ending tangents, and constantly insisting that he needs to retire, I found that Poirot was one of the most likable characters I have encountered. Second to Robert Langdon (from the Da Vinci Code), of course.

The 13 suspected characters are gradually introduced with first impressions establishing their personalities quite well. For example, Mary Debenhan, played by the rising actress, Daisy Ridley, was introduced as a confident and well-educated woman by the first phrase she spoke. Her character was further defined throughout the movie by things as small as her posture and word choice. Some characters were far more established than others; however, it was excusable due to the number of characters that needed to be developed in such a limited time.

Interrogations also gave further information on characters, but the interrogations are constant and, to some, might seem uneventful. But worry not, since the director cleverly introduced small action scenes that provided relief. These scenes were not in the novel, but were added in since Poirot preferrs the use of words as weapons rather than physical acts. One eventful scene in particular — involving McQueen being chased down by Poirot on the wooden bridge — includes quite a bit of tackling, falling, and punching that does not fit the detective’s personality or physique.

With wonderful characters and a plot that appeased murder mystery followers everyone, Murder on the Orient Express is the movie to see. Now for the spoiler you have all been waiting for: the butler did it (there is no butler… or is there?). Go watch the movie and find out.