Lady Scorps Top Off Senior Night with a Win 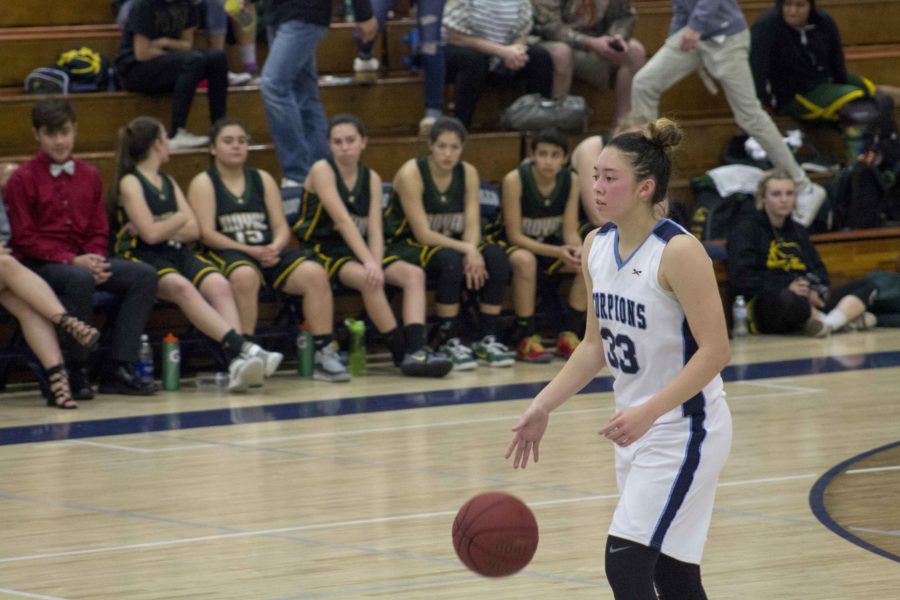 Junior Madeline Weight dribbles the ball up the court.

Five seniors on Cam High’s varsity girls basketball team celebrated their final regular season game in the Scorpion Dome with a win versus the Royal Highlanders in a 69-20 rout on Tuesday, Feb. 8.

Traditionally, the last regular season home game is “Senior Night,” the final time the seniors play a regular season game at home. Cam High honored seniors Bryne Kirksey, Mariah Gulsvig, Nikki Puga, Cameran Bahnsen, and Faith Chavez with flowers, posters and spots in the starting lineup before tip-off. “I cried before the game because I was really sad, but once the game started, everything just kinda went away,” said Gulsvig.

“It’s a good group of girls. I’ve enjoyed coaching them. The girls that have been through the three years I’ve been here are just nice girls, and I respect and appreciate what they did for the program,” said head coach Mr. Mike Prewitt.

Cam High controlled the tip-off to begin the game. After a few scoreless possessions for both teams, Chavez got fouled and scored the first two points of the game with free throws. After breaking the ice, Kirksey connected on back-to-back threes and forced Royal to call a timeout as Cam High went up 8-0. Royal scored their first points at the 4:20 mark and scored again to shorten Cam High’s lead. However, the Lady Scorpions quickly fought back and scored 10 straight points while keeping the Highlanders scoreless. The first quarter ended with a score of 22-6 in Cam High’s favor.

Cam High continued to build their lead in the second quarter, keeping Royal scoreless with a swarming defense that forced the Highlanders to turn over the ball multiple times. Royal then hit a three-pointer to break their scoreless quarter, but junior Madeline Weight answered right back with a three of her own. The Lady Scorpions kept Royal to just four points in the first quarter and held a 37-10 lead heading into halftime.

Weight scored the first points of the second half after she converted an and-one. The third quarter was the same as the first half, as Cam High’s defense proved to be too much for the Highlanders. Cam High extended their lead and ended the quarter up 57-16.

The Lady Scorpions put away Royal in the fourth and final quarter after burying a few more shots as time ticked down. The crowd cheered as the clock hit zero and Cam High walked away with a victory.

The win improved Cam High’s season record to 23-3, also adding another win to their perfect 7-0 record in league play. With the perfect league record, Cam High stands in first place atop of the Coastal Canyon League and even clinched the league title earlier in the week for the third time in the three years they have been in the Coastal Canyon League.

“Well of course that’s one of your goals. We divide the season into three parts: the preseason, where we really get to know ourselves and what out roles are gonna be, then there’s league play, where the goal is to win league, and the final third part is the playoffs,” said Prewitt. “So we just try to take it one game at a time and stay focused and do what we’re supposed to do.”

The Lady Scorpions finished the season undefeated in league play with a 63-43 win in their final regular season game away against the Moorpark Musketeers (12-16, 4-4 league) on Thursday, Feb. 9. They head into the playoffs win a 24-3 (8-0 league) record.

“We should just take it one game at a time and figure out how we’re gonna be the best we can be,” Gulsvig said.