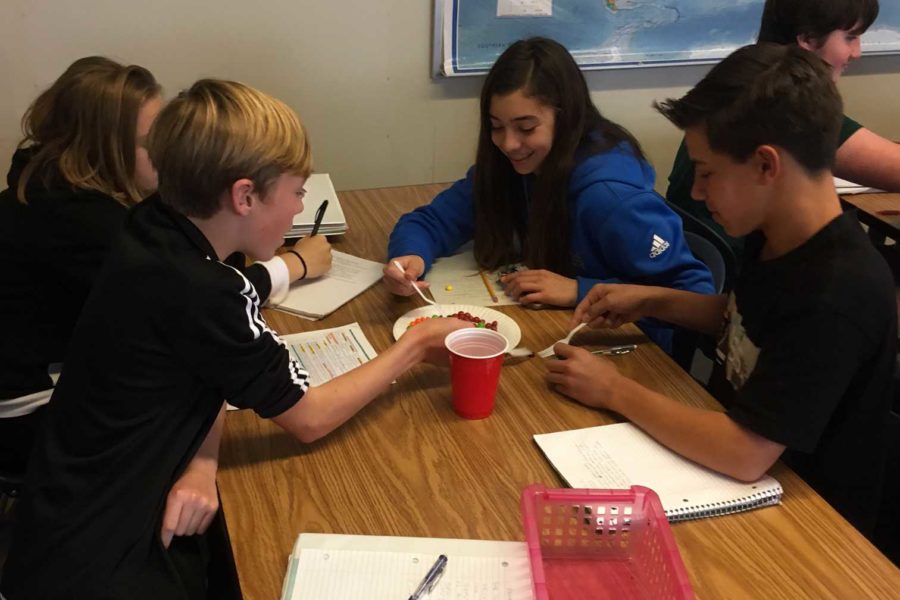 Candy isn’t just for snacking anymore. This year, Ms. Patricia Valenteen used the famous colorful candy, Skittles, to teach her AP Human Geography students about racial and ethnic issues around the world and in the Camarillo community.

AP Human Geography offers analyses on different aspects of humanity and its interactions with the planet, including population, migration, the development of languages, religion, and folklore, and the difference between race, nationality, and ethnic groups.

On Jan. 12, students learned about ethnicity and its relation to human interactions using skittles candy. The various colors represented people of different cultures. “Skittles [are] a big group. That’s a race, the Skittle race. And then when they split them into colors, [each color] was an ethnic group,” said Valenteen. “And an ethnic group makes up an entire population of country, as a nation state. Then they had to pick one [color] that they liked better than everybody else, separate them, and that was […] segregation.”

During the activity, students chose a group of colors to put aside in a cup to represent ethnic cleansing in history. “You removed them from society based on your opinion of them and that’s […] genocide,” Valenteen said.

Valenteen adapted her Skittles activity from a lesson she saw on a Facebook for AP Human Geography teachers. She changed the materials from M&Ms to Skittles due to the price, brighter colors of the Skittles, and easier clean-up process. Valenteen said she liked the idea of, in her words,”using a lesson that the students liked or are more interested in [other than taking notes], that they could manipulate, and to talk about different aspects of  vocabulary.”

Valenteen’s students said they enjoyed the lesson. “It made a good visual for all the vocabulary we learned,” said freshman Joe Nishimori. “And we got to eat Skittles afterwards.”

According to Valenteen, the ultimate aim of the process was to help students to understand the realities of racial and ethnic issues across the globe and engage them in the subject of human geography.  “There is a dark side to nationalism and racism, that kind of thing.  [The things they learned through the Skittles activity are] basic concepts, but a way for them to be aware,” she said. “Everyone shares commonality with people all over the world,”