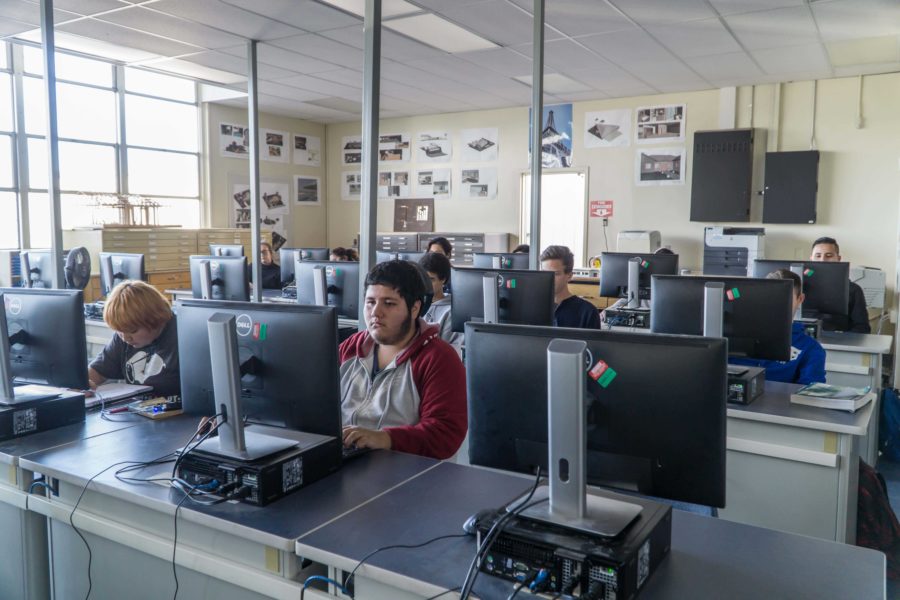 Seniors will take the online test at the end of the year as a test for statewide science learning standards.

Cam High seniors will take the science section of the newly implemented California Assessment of Student Performance and Progress (CAASPP) this spring, in order to measure levels of comprehension and retention in California high schools.

The California Department of Education (CDE) randomly assigned all California high schools one grade level- either sophomores, juniors, or seniors- that will test in science that year. Seniors were chosen randomly to be tested at Cam High, along with other schools in OUHSD including Condor, Frontier, Pacifica, and Hueneme high schools.

“I have a lot of respect for this senior class, they’ve had to do a lot of testing,” said Peterson. “But the state’s telling us we have to test them.”

After this trial run, the CDE will determine which grade level yields the best scores throughout the state for a portion of the CAASSP test, called the Computer Adaptive Science Test (CAST). For example, if most students perform best junior year, CAASSP will choose to test that grade level in future years in order to avoid assessing students about information they have not been instructed in yet. CAASSP aims to simply test students’ knowledge levels at their prime.

“[The CDE] wants to see where students are at. Different districts will start students at different [science courses]. They wanted to get a feel for what the best grade level to test is,” said Mrs. Karen Chadwick, Cam High’s assistant principal.

Most science teachers, including Mr. John Gonzalez, do not plan to prepare his seniors for the CAST. “Since this is a baseline measurement, the testing entity is looking for how students do as a starting point for subsequent testing years that are tied to performance markers,” he said. “Preparing the students beyond their regular coursework doesn’t really help with that process of establishing a legitimate baseline.”

The online exam, which requires about an hour to complete, covers earth science, biology, chemistry, physics, and some engineering information. Testing will occur this spring, most likely after senior finals, according to associate principal Mr. Gary Peterson. Seniors not enrolled in a science course will miss another class to take the test.

Chadwick does not predict any school schedule changes to accompany the testing. “It’s not going to take too much of their time,” she said. “It’s not like we’re making you take a four hour long test.”

Students will not be able to receive their scores for the CAST. “Students will not receive their scores for the pilot test; however, student participation data will be collected and reported for accountability purposes,” said OUHSD superintendent Mrs. Penelope DeLeon. “[The test results will] give us better information about our students’ preparation toward achieving college-readiness, which is our priority. We want students to not only be eligible for college, but also be successful when they get there, should they choose to go.”

Over the years, California state testing has evolved to match education trends and discoveries. In the past, students took the California Standards Test (CST). In response to rising Common Core philosophies, the CAASPP test was introduced to assess California juniors in math and English in 2015.

Last year was the first year that CAASPP results were publicized, and compared to similar standardized exams distributed by the United States Department of Education for other states. Cam High’s scores were also compared to other schools in Ventura County. “We not only beat every school in this district, but we beat most of the schools in this county,” said Chadwick. “This makes [Cam High] look like the strong school that we are.”

With Cam High’s scores, principal Dr. Kim Stephenson applied to receive the Gold Ribbon Schools Award, an award organized by the CDE which recognizes achievement in “implementing state standards in priority areas.” Results have yet to be announced.

Aware of these implications, teachers will analyze the results of these exams in order to advance the efficiency of their instruction. “Let’s say I’m an English teacher and my students scored particularly high and another teacher’s didn’t,” said Chadwick. “Then, they might sit down and ask themselves what they’re doing differently.”

If students take this test seriously, they will help California determine which grade level to test, consequently, helping future students succeed in the exam. However, many seniors do not want to take the exam since their scores will not directly affect them. “I hope people don’t think it’s a negative. I hope they just go in there and try their hardest,” said Chadwick.

“From a senior’s point of view, I think [the CAASPP test is] unnecessary because we already took it our junior year,” senior Natalie Sheehan said.

“I don’t think it will be an accurate measurement, because in math and English classes, the curriculum builds on itself […], but various science classes are very different and not very related, so [testing] would be challenging,” said senior Mikka Vapor.

According to Gonzalez, though, senior year is the best year to test in science. “Senior year makes sense from a cumulative standpoint,” said Gonzalez. “I think it is reasonable to test in the junior year, though it will be a challenge to adequately teach the four science disciplines plus engineering standards within a two year window.”

California freshmen, sophomores, and juniors await the state of California’s verdict to discover what grade levels’ science skills will be tested next year.