Taste and Tell #7: Food Worth Taco-ing About 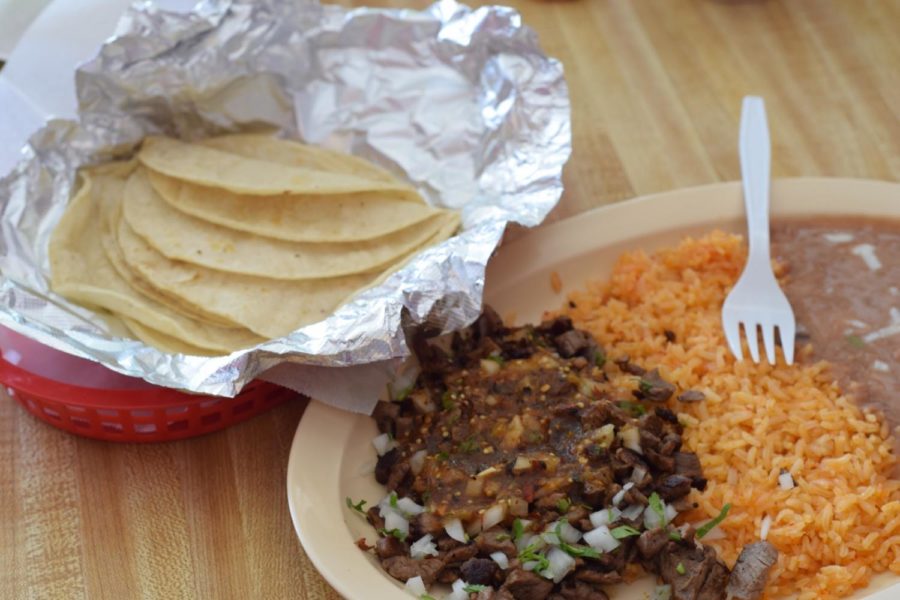 Camarillo is home to an abundance of Mexican food establishments scattered around town; and while some may be well-known, such as Establos Meat Market, others aren’t as popular, including the restaurant we visited today. Taqueria el Tapatio is one of three locations in the Greater Los Angeles area. A hole-in-the-wall eatery hidden within the depths of the Ponderosa Shopping Center and decorated in a muted coat of red with various Spanish trinkets, the inside of this small restaurant resembles a cafeteria designed for one to quickly purchase their food to-go, or to sit down and have a quick meal.

Once we entered the taqueria, the distinct smell of cooking Mexican food hit us. The posted menu is large, yet easy to understand, and the employee working was friendly and helpful. They also have weekly deals such as “dollar tacos on Tuesdays.” The kitchen was easily visible from the cash register, and looked neat and clean.

They also have a salsa bar, but it looked messy and kind of dirty. Maybe with fresher looking salsa and a cleaner salsa bar station, it’d be as enjoyable as they intended it to be. In addition, the large windows at the front of the eatery contributed to the airy, open atmosphere. Overall, though, the taqueria was clean, and had a welcoming, calm vibe.

Cecilia: I’ve come to Taqueria El Tapatio a few times in the past and I order the same thing every time: the asada super burrito: an asada burrito that has rice, beans, cheese, sour cream, and guacamole. You can also order the regular burrito, but it doesn’t include sour cream and guacamole in it. The burrito cost around $7, and the portion size was definitely worth the price. Inside the large, foil-wrapped burrito was a warm, messy mix of all of the fillings.

Ideally, there would be an even amount of each ingredient in every bite, but some of the ingredients overpowered the others. I didn’t taste any of my guacamole and the only hint that sour cream had been added was that there was a slight creaminess in each bite. The immense size of the burrito also added to its messiness. I ended up eating the excess filling by scooping it out, like a dip (which it resembled because of its consistency). At last, there was only a couple bites of soggy tortilla and I ended up just throwing it away since I was so full already. Nevertheless, I enjoyed the flavor of the burrito overall and left the taqueria satisfied.

Kaylie: Because I didn’t want to order what Cecilia did, which was a burrito, I ordered the beef combination plate. The $10.85 plate came with beef, Spanish rice, beans, tortillas, and chips on the side. I tasted each part of the plate individually, before tasting it as a sort of make-shift burrito, and all of the food tasted okay. The beef tasted fine, the Spanish rice tasted like one would expect it to, the beans tasted like an average plate of beans, the tortillas were fine, and the chips tasted okay. Nothing about the dish stood out to me, it all tasted… average.

Not that average is bad. I will say however, that the food was filling, and I found myself having to take it home because I couldn’t finish. Overall, the food was decent.

Cecilia: Taqueria El Tapatio is the kind of place you go to when you’re short on money but not short on appetite. The combination of large portions and low prices is great, and the food is quality too. This has actually become my go-to restaurant for burritos and the food has been more than decent every time. I’ll definitely come back in the future.

Kaylie: I can sum up the food, and the experience, I had at Taqueria El Tapatio with one word: average. There was nothing particularly memorable about this restaurant to me. The food tasted like any decent Mexican food would. The service wasn’t spectacular, but it wasn’t terrible. The atmosphere wasn’t amazing but it wasn’t awful. I might come back in the future, as the food wasn’t bad, but it definitely isn’t food I will be craving.