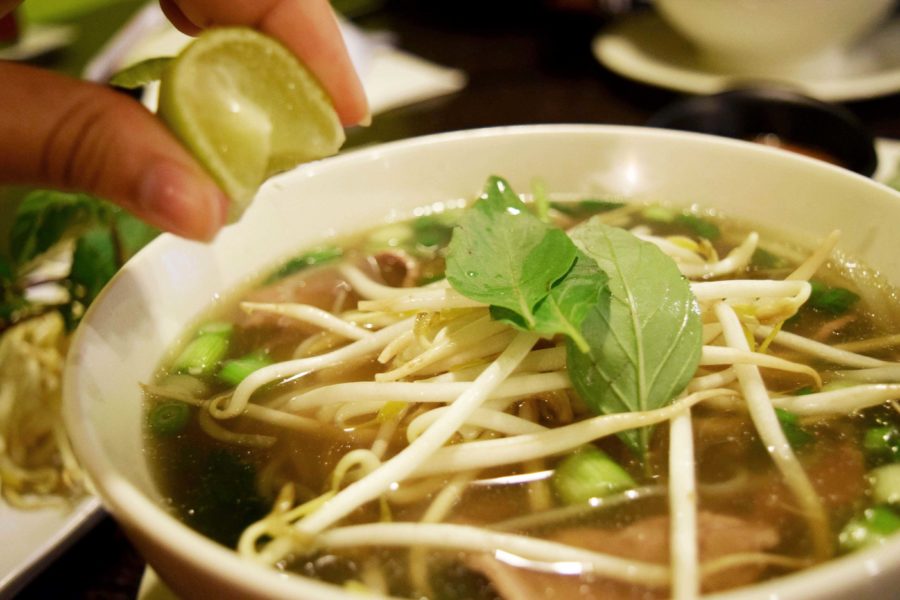 Recently, Vietnamese foods such as pho and banh mi have gained tremendous popularity among foodies and the general public. These types of foods have become more readily available within many towns, and Camarillo is no exception. Love Pho N’ Mor, located on Arneill Drive, is one of two Vietnamese restaurants in Camarillo. The quaint eatery is tucked into the corner of Ponderosa Shopping Center, where its distinctive red and white sign stands out against the banal gray colored buildings. Its modern interior design features lime green walls, flowery white lanterns, and chocolate brown accents.
The Experience

After entering through the restaurant’s glass doors, we were seated right away since we had come at around five o’clock for an early dinner and the restaurant was mostly empty. We ordered water for our drinks and the summer rolls as an appetizer. Shortly after the rice-paper-wrapped rolls were delivered, we ordered our bowls of pho. The service was good; the waiters and waitresses were friendly and polite, checking back with us every 20 minutes or so. The food also came out quickly, and our pho was ready 10 minutes after our summer rolls had come.

The summer rolls, or Nem Nuong Cuon in Vietnamese, consisted of grilled pork paste, lettuce, cucumber, a small roll of fried egg roll wrapper, sliced carrot and mint leaves all wrapped up in rice paper and served with a special citrus-flavored sauce. The two halved rolls cost $5.25, which seemed a bit pricey for the portion size at first, but the rolls turned out to be quite filling.

Vietnamese noodle soup, or pho, is a steaming bowl of beef broth with rice noodles (also known as banh pho) and beef in it. A chicken version of the soup is also available. The beef comes in several different forms, including a brisket, thinly sliced rib eye steak, meatballs, and more. Sometimes more exotic cuts of beef such as tripe and tendon are put into the soup. However, we ordered the pho with thinly sliced rib eye steak. Beef broth for pho is usually cooked with marrow-rich beef bones or beef knuckle bones and a fragrant blend of star anise, cloves, ginger and onions.  The ingredients are slow cooked for several hours before it is ready. A plate of soybean sprouts, jalapeños, lime, and stems of Thai basil are served on the side with the soup. These ingredients, along with hoisin sauce and sriracha are supposed to be added in for extra flavor, texture, and aroma.

Kaylie: Before coming here with Cecilia, I had only tried pho before, but not summer rolls. I wasn’t sure how I would feel about them, but I found them to taste refreshing. The cucumber and mint hints within the roll really stand out in the first bite, and allows for an amazing combination of flavors. All the ingredients mixed well within the summer roll, and I would definitely order the dish again.

Onto the pho, which was pretty standard for a place that specializes in this dish. The noodles were well cooked, and the brisket that came with my order was a nice addition to the overall taste of the pho. The warm broth was especially flavorful and was a nice contrast to the cold weather that day. Though I ordered a small size, the amount of pho provided ended up being too much for me and I was barely able to finish it. Altogether, the amount of pho I received compared to the price was worth it, and I would definitely revisit this restaurant.

Cecilia: Being Vietnamese myself, I’ve grown up around this cuisine and am familiar with it. The summer rolls were refreshing, the cucumber and mint contrasted nicely with the pork paste, which could have been seasoned a bit more. All of the different flavors mixed very well and the sauce added another unique aspect of flavor. Also, the cucumber and the fried bit of egg roll wrapper added some fun textures in the roll. Since most of the flavor in the roll were fresh and flowery, a spicy dimension would have been nice.

The pho was decent. It tasted good but there was nothing outstanding about it. The broth was a bit too salty and then noodles were not as al dente as I would have preferred. But, overall, I really did enjoy the soup and would order it again.
Overview

Kaylie: For the most part, my experience at Love Pho N’ Mor was a good one. I definitely got my money’s worth with the hearty portion sizes, and there was a relaxed ambience at the restaurant. The service was great too, since our food came to us quickly, and the meal was satisfying. Though the pho didn’t stand out, I will definitely be back to eat at this establishment again due to their cheap prices and adequate food.

Cecilia: My overall experience at Love Pho N’ Mor was pretty great. It’s nice that there’s a restaurant in Camarillo that serves Vietnamese food. The food is pretty good, and the service is great. Yes, there are a few things that could be changed, but they are pretty minor and I will definitely be coming back.