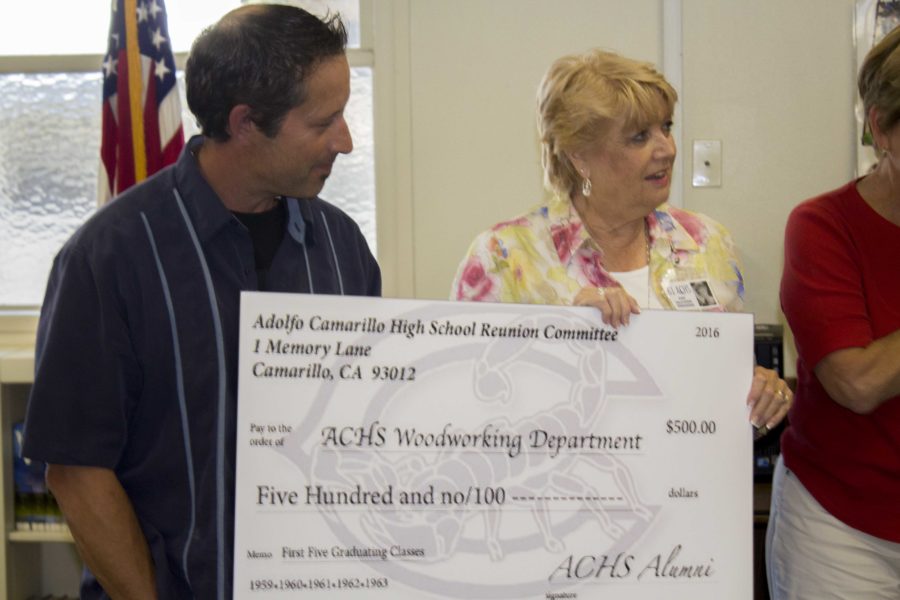 Mr. Peter Watchel, Woodshop teacher, being handed a $500 check from Mrs. Pat McCord, class of '61, and other Cam High alumni's for the woodwork department. The first four graduating classes also donated a $500 check to the music department.

During a staff meeting in the library, band director Mr. Daniel Cook and industrial technology teacher Mr. Peter Watchel were each presented with a check for $500 donated by the first four graduating classes of Cam High. The donations came from remaining funds in an account raised in various events held by the alumni.

The group is run completely by the alumni, who decided they wanted to give back to the school they loved in their adulthood. Many of them met on the Facebook page, ‘I Grew Up in Camarillo.’ “We organize luncheons and get-togethers to raise money that we put in a fancy little bank account and dish out when we see a need [at Cam High],” said Ms. Ruth Kilday, class of ’59.

“We’ve never made anything official, [our alumni group] is a very informal get up,” said Mr. Charlie Carr, who also graduated in ’59. The usual “get togethers” are casual, often just a luncheon hosted by someone who then asks for a certain amount to attend. All the money that doesn’t go to reimbursing the host goes to the bank. The group became a presence in the Camarillo community about 11 years ago.

The presenters of the donation included Carr and Kilday, as well as Mrs. Alice Frost and Mrs. Pat McCord, from the class of ’61.

Carr said that though he wasn’t the best student when he was a student at Cam High, he saw the significance of being a graduate later in adulthood. “I was a party child [back in high school]. I slacked off and did only enough to get by,” Carr said. “I did get my act pulled together, in the end.”

In his junior year, Carr took an art class and found motivation in the form of his teacher. In that class, Carr found the inspiration to teach and went on to do so for nearly 40 years.

Frost was an avid member of Girl’s League, one of the school’s first official clubs and a girl’s empowerment club, as well as part of the school’s budding pep squad and an editor of the yearbook for the years of ’60 and ’61. “I remember for Adolfo Camarillo’s 90th birthday, he was still alive at the time. The entire school marched from the school to his front porch at his ranch,” she said of traditions at Cam High. “We sang and he stood there and smiled the brightest smile I’ve ever seen.” The tradition continues to this day, as the Cam High marching band plays happy birthday for Don Adolfo Camarillo’s birthday every year at his ranch.

McCord was captain of the drill team, held various positions on the student council, and was in the school’s choir. “I was really involved in anything the school had to offer. I just wanted to be a part of everything,” she said. McCord went on to become a history teacher in Northern California and is now retired.

Kilday was secretary of the Student Body and president of Girl’s League. “I’m proud to be a part of the first class and coming back I’m even prouder to see how far we’ve come,” she said.

After graduating, Kilday moved on to college in San Francisco and later became the founder and director of the  Mountains Conservatory Foundation, specifying in the Santa Monica Mountains. “I learned a lot about starting things. Being in the first class gave me the confidence to start something big and see it through,” she said.

During their visit, the alumni toured the campus and took note of the changes. “We didn’t have a gym or a library [when we were students here],” Carr said. “But I’m really glad they’re here now.” All of the visitors also praised the new aquatic center.

“I think [my favorite part of campus] is the mural on the stadium. Every time I drive by on the freeway I get to say ‘yeah, that’s my school,'” said Carr.