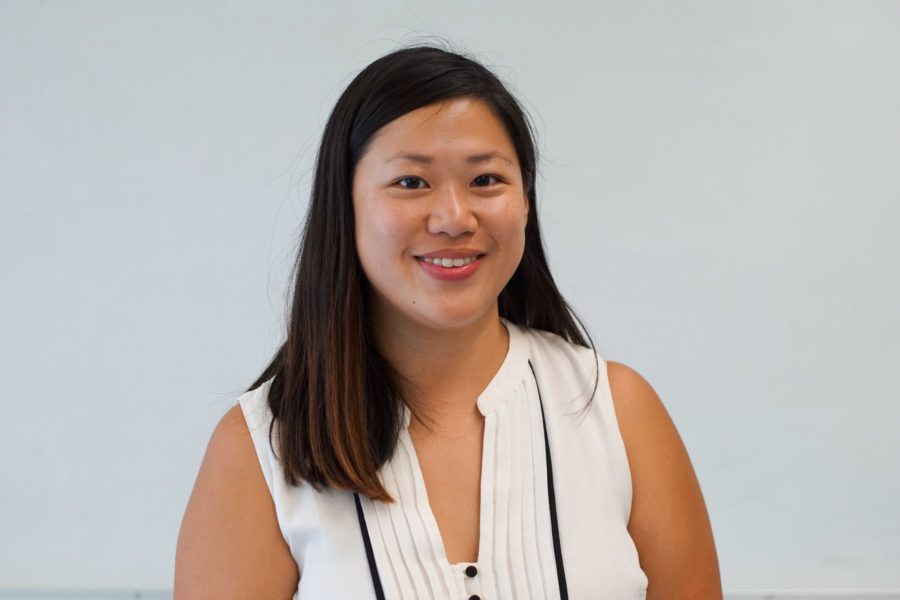 "I am not really a fan of sitting behind a desk all day. I tried that. It was fine, but it was not that interesting to me. In teaching, you get to interact with students all day, and it is just so rewarding," said Mrs. Anne Huang, Mandarin and French teacher.

In her first official year of teaching, Ms. Anne Huang hopes to bring her passion for languages to Cam High as she takes on the position of teaching both Mandarin and French.

Huang, who was raised in New York, attended Cornell University out of high school with a major in French. After graduating from college, she got the opportunity to go to France and involved herself in a teaching program at the school of École Celestin Freinet in a small town named Bagnols-sur-Cèze, teaching English for seven months from 2012 to 2013. She then moved to California, where she student-taught French II at the Orange County School of the Arts from June 2015 to July 2016, and went on to obtain her master’s degree in teaching from the Master of Arts in Teaching program and finish her Single Subject Credential program at UC Irvine.

During Huang’s interview for a part-time teaching position as a French teacher at Cam High, interviewers offered her a Chinese teaching position as well after they discovered that she knew Mandarin. “They were surprised and they said, ‘Oh, well, we have a part-time Mandarin position. Why don’t we combine the two and make it full time?'” she said. “I wasn’t planning on teaching Mandarin. It happened. I just thought, you know, that way I can get as much experience as I can during my first year of teaching.”

“All of my supervisors and everyone during my student-teaching [job] kept asking me if I was sure I wanted to do this,” she said. “It’s a challenge for sure [to take on] two languages and three split levels of classes. The combined classes in particular- it’s hard to give [both of the levels] my time, because I want to teach both levels and I want to make it interesting for both levels, so I can’t teach them all the same exact thing. It’s a lot, but I’m definitely learning a lot.”

Huang currently teaches three combined classes of Mandarin 1 and 2, 3 and 4, and French 3, 4 and 4 AP along with separate French 1 and French 2 classes.

Throughout high school and college, Huang did not have a certain career in mind; however, she did know that language was the path she wanted to follow. “[Language] is definitely something I have been interested in for a long time. I grew up speaking Mandarin and another dialect of Chinese with my family, so I guess I kind of caught on early,” Huang said. “In high school, I started learning French, really enjoyed it, and got good at it, so I continued it in college.”

After the teaching program in France, Huang knew that teaching was the right fit for her after connecting with her students. “It was really funny because I grew up in New York and those kids grew up in a small town in France, so most of them have never gone outside of the country. They would ask me these really funny questions about the U.S. and New York. ‘Are the taxis really yellow?’ Things like that.”

Huang approaches teaching as an interactive field and tries to stay away from pure worksheets.  “I am not really a fan of sitting behind a desk all day. I tried that. It was fine, but it was not that interesting to me,” Huang said. “In teaching, you get to interact with students all day, and it is just so rewarding.”

As a world language teacher, Huang encourages interaction and engagement with the language. “I like to have a very student-centered classroom. I want to make sure that my students are interested in [the classwork] and that I am providing them with materials that are authentic and relevant. The textbooks are useful, but I also like to use outside materials, like news articles and things,  just so that they can see what is actually going on in the real world.”

Instead of forcing her students to speak in an unfamiliar tongue, Huang prefers to focus on listening, reading, and writing first, and then slowly working towards speech. “I don’t want them to feel pressured, because I want them to enjoy the language. But of course, in order to learn the language, you have to produce,” she said. “Certain times when students would use, for example, a vocabulary word you taught recently that you maybe thought they might not have learned completely yet, but they used it correctly, I did a good job. Things like that make [teaching] worth it.”