“A Future to Believe In” 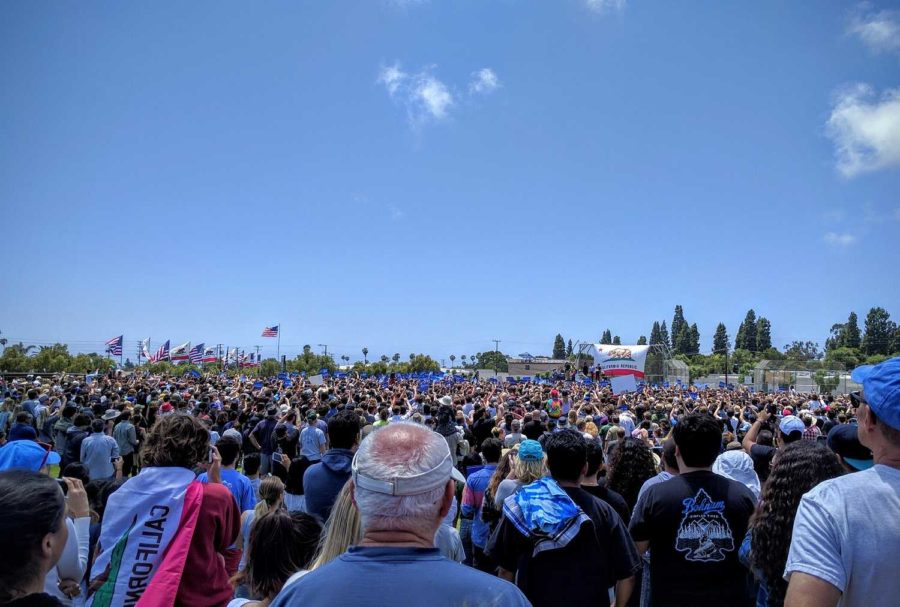 The rally aimed to drum up last minute support before the crucial California primary on June 7. A line of supporters stretched around the campus, many waiting two to three hours to enter the premises. Though the rally began at 10 A.M., Sanders himself did not make an appearance until approximately 1:30 P.M.

After brief introductions from both his staff and regional representatives, Sanders opened his address by first acknowledging the large, diverse crowd and then by applauding his supporters for their contributions.

“This is a grassroots campaign, by the people, for the people,” he said, his statement echoed by the excited crowd. Sanders then went on to confirm a debate between himself and Republican presidential candidate Donald Trump; however, such debate was canceled shortly after by the Trump organization.

The senator then addressed his primary opponent Hillary Clinton, stating that she will be defeated with rallies and events such as the one in Ventura. He noted that according to his staff, he will have personally addressed over 200,000 Californians by the California primary, and emphasized his complete confidence in winning the Democratic presidential nomination.

The senator also touched on the core principals of his platform such as income inequality and health care reform during the rally, frequently asking the supporters questions regarding student loans, health insurance, and income distribution. He said to the crowd while discussing his tax plan, “It is time Wall Street help the middle class.” With regards to the corporation Walmart, he said, “The Walton family, get off of welfare and pay your employees a living wage.” Both comments were followed by thunderous applause from the attendees.

As the rally wound down, Sanders shifted his focus to the Hispanic and African-American communities of Ventura County, discussing the injustices in U.S. drug policy, immigration process, and justice system. He also advocated the decriminalization of marijuana and declared that under his presidency, “The United States would not have the most prisoners in the entire world.”

The senator’s final words thanked his supporters, and the rally concluded at about 2:15 P.M.