Near awarded Teacher Adviser of the Year for Junior State 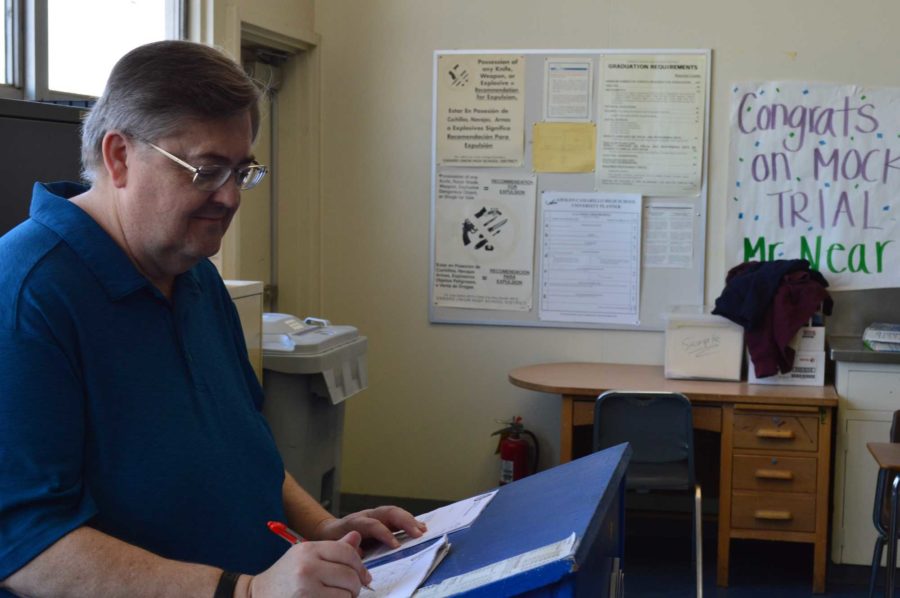 Mr. Near, adviser to the Mock Trial and JSA teams, teaches his Economics class.

“I’m surprised and thrilled. This is my fourth year in JSA, and I’ve met some very good teachers who are advisers to their clubs, and several who have been doing this longer than I have,” said Near. “I was surprised they picked me, but I’m glad and thankful.”

Near believes his students played an important role in his receiving of the award. “When you take kids on an overnight excursion, there’s so much that can go wrong. I’ve been lucky in that we’ve never had those problems,” said Near. “With the staff of JSA and the organization as a whole, our chapter has a really good overall reputation, and that may be part of the reason I got the award.”

Near has over 24 years of teaching experience, and is currently teaching  his sixteenth year at Cam High and advising the Mock Trial teams.  Before teaching in Camarillo, he began his teaching career in Simi Valley.

Near became the JSA adviser after former students asked him to chaperon their group at Fall State four years ago. “I got there and I heard the debates that went on and I was impressed by what I saw. Teenagers, freshman through senior, and they’re having good, intellectual debates about issues, social and political,” said Near. “Also the fact that, for the most part, the students were running the convention. Apart from the teachers, there are only a handful of other adults there that run the convention. The kids do a lot of the work to make that convention happen, so that really impressed me. I’ve stuck with it ever since, because I enjoyed going to the conventions and seeing the kids, especially our kids here at Camarillo.”

Near believes the most rewarding part of being an adviser is getting to know his students and seeing them grow overtime. “With both JSA and Mock Trial, we have freshmen and sophomores come in and they’re kind of young and shy and may be a little reluctant to get out there in public at the beginning. Overtime, they grow from shy and uncomfortable to confident and assertive. We have a rule in Mock Trial, ‘you don’t take trash from the coaches,'” said Near. “Both groups are a good group of kids. That’s why I’ve been doing it for so long, because of the kids. They’re fun to work with.”

Besides advising these programs, Near enjoys teaching overall. “The most enjoyable part of teaching is those moments when you have a really good back and forth conversation with students,” said Near. “I like working with the kids and the whole aspect of teaching, the taking of knowledge and passing it on to kids, helping them learn and appreciate history.”