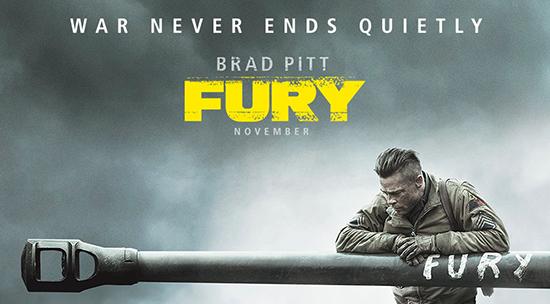 Brad Pitt's new film is anything but ordinary, says the Stinger's reviewer.

Fans may come to watch Fury in anticipation of yet another meaningless action film featuring a shirtless Brad Pitt surrounded by explosions as rock music plays in the background. But this movie is anything but that.

Fury is a gripping WWII drama that tells the story of a group of men operating a tank. It is the end of the war, and the allies are making a final push into the heart of enemy territory. The allied tanks are outmatched by the superior Nazi tanks, as we are told at the beginning of the movie. This is the story of one tank’s crew and their struggle against an enemy that has them out-numbered and out-gunned.

Fury is visceral, real, and at times, frightening. Not necessarily because of anything happening on screen, but the mere knowing that there were real men that endured these things during WWII evokes a great deal of emotion. The film is also dripping with atmosphere, and you can see that great care was taken in making these wartime scenes and environments look as real as they possibly could be on film.

For a while, the film threatens to become cliché. A new guy, not suited to the horrors of war, joins a hardened tank crew after one of their members dies. Initially, I thought that it would be a typical ‘new guy learns the ropes’ story, or a ‘crew comes to care for and respect the new guy after interacting with him’ story. And while the film does include elements of both these plots, it is brief and not the overall focus of the film. It is, rather, one piece in the midst of a more complex plot.

The musical score is excellent and appropriate to the greater picture of the film. An orchestral arrangement accompanied by a choir greatly adds to the gloomy atmosphere. The composer, Steven Price, also composed the score for the last two Lord of the Rings movies.

All the cast members gave excellent performances, and while you may not end up caring too much about them, it is certainly interesting to watch them interact with each other. Even Shia LaBeouf rises out of the pit that his recent Hollywood antics have dug him in, and gives what I feel is his best performance since his early role in the film Holes. Fury is directed, written, and produced by David Ayer, who also wrote such gritty movies as Training Day and The Fast and the Furious.

Powerfully directed, written, shot, and acted, Fury has certainly breathed new life into the war-movie genre, and perhaps even into the historical genre as a whole. This movie doesn’t set up for a sequel or even need one (like almost any other movie these days). However, it is certainly a type of movie that we would like to see a lot more of.