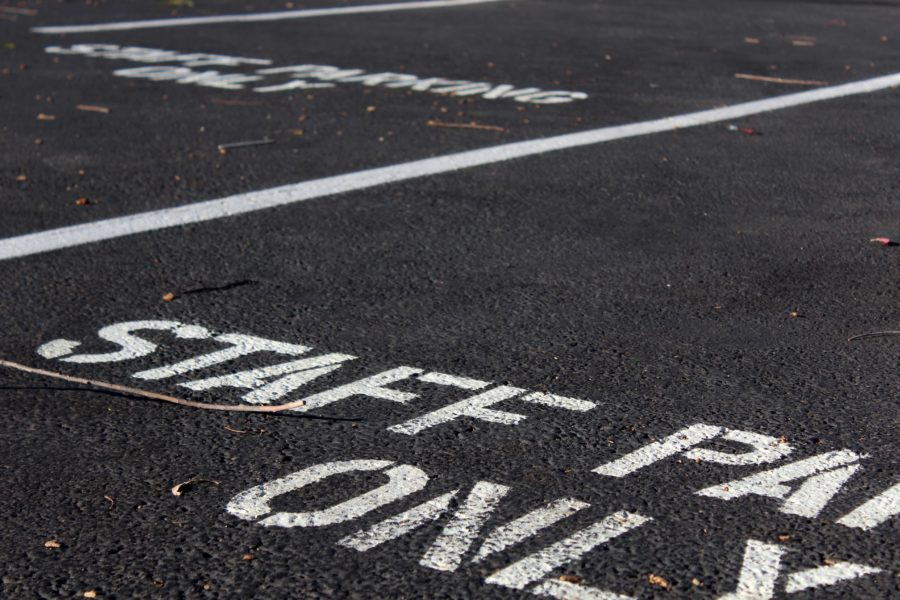 Staff Parking Spaces sit vacated in front of the office; 27 teachers are estimated to be absent this Friday, leading to possible school-wide complications.

27 staff members are expected to be absent the day before the start of winter break according to Cam High office staff, causing a potential shortage in the number of teachers and substitute teachers necessary to cover all classes. And that number could go as high as 35 teachers according to officials.

On Friday, Dec. 18, many faculty members are reported to be taking a “personal necessity day”, so that they may attend the CIF state championship football game in Sacramento, California. But the game also falls on a date that traditionally has a high number of absences as teachers make holiday plans.

Sunday evening, Cam High principal Dr. Kim Stephenson placed a school wide call notifying students, parents, and faculty members that she was “looking into” the possibility of canceling classes this Friday, and would follow up in another call as soon as a decision was made. However, no later call was made.

“We were looking into moving an April, 2016 in-service day for teachers to this Friday,” said Stephenson during a faculty meeting. She noted that such an action would have required a district board meeting, which could not be properly scheduled in time to make a decision for Friday.

“A board meeting has to be announced and made public,” Stephenson said. “There was no time to do that in good order.”

Some teachers, however, expressed discontent with the school’s decision to hold classes this Friday. “All of us felt [taking Friday off] would have been more reasonable,” said former English teacher and current librarian Ms. Heidi Resnik. “I will be celebrating in Sacramento [this Friday].” Resnik stated that her decision to take the day off of school to watch the game in Sacramento was due to her pride in the Scorpion football team. “I am so proud to be a Scorpion. I am especially proud of the adults who worked so hard to make this happen.”

The absence of teachers is expected to cause a large displacement of students at Cam High. Many of the  teachers who will be present Friday, such as music teacher Mr. Daniel Cook, offered to take on the task of substituting for the displaced students during his free periods.

“I spoke to Ms. [Linda] Westbrook and offered to sub for […] some first and sixth period classes,” Cook said.

While many teachers plan to be absent on Friday, whether they are ill, to attend the football game or for previously scheduled personal conflicts, numerous classes also do not have academic learning days scheduled.

“I can see how some students would consider not coming on Friday, but, from my perspective that would be like skipping Christmas,” joked social science teacher Mr. Chris Quinn. “It’s a day when classes have parties, and teachers who are here are going to do their best to have fun with students. It seems like a bad day to miss.”

Quinn will be at school this Friday.

Stephenson acknowledged that chaos is inevitable this Friday, but hopes that the students and staff will keep their composure during the school day.

“We’ve been a school for sixty years. This is the first time our football team has gone to the state championship game, so it is going to be a little frantic.” she said.