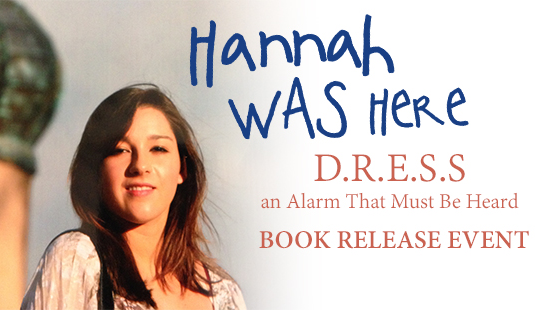 Cam High student Hannah Szakacsy was 16 years old when she had an adverse allergic reaction to a common acne medication and passed away 102 days later in the summer of 2011. There is a bench in the quad of Cam High’s campus dedicated to Hannah’s memory.

Three years after her daughter’s passing, Nancy Szakacsy is going on tour for her book “Hannah Was Here: DRESS, an alarm that must be heard,” which documents the day to day struggles of the Szakacsy family as a result of Hannah’s death.

The start of Szakacsy’s tour will be a book signing at the Bookworm in Camarillo on October 11 from 2 to 4 p.m. She said her work is to educate the medical community as well as members of the Camarillo community. “You guys are all my family,” she said of Cam High’s students. “You might as well be my kids.”

The book took three years for Szakacsy to write and publish. She said the reason she needed all that time was because she was grieving and needed to word her message in a meaningful way.

“It really wasn’t that long to do a project like this and it’s super fast considering what we just went through,” said Szakacsy. “It took me that long because I needed to get it out in a way somebody would believe me and listen, otherwise we’re just strangers to people. Who would care?”

After writing the book, Szakacsy had difficulties getting it published. The book was rejected a total of six times before it was accepted by a publisher.

“I got all the way to where [if] I published the book, then the publisher was afraid we were gonna get sued,” said Szakacsy. She said that she had to fight several lawyers to be able to expose Hannah’s prescribed acne medication, which was Minocycline, which induced Drug Reaction Eosinophilia and Systemic Symptoms (DRESS) in Hannah. DRESS is an autoimmune allergic reaction to a medication; meaning that it causes the body to attack itself.

“I was afraid it was too much for teens,” Szakacsy said. “It turns out that […] they’re picking it up and they’re reading it all the way through and they’re listening, and it’s so important because we know [teens] have a high possibility that [they’re] gonna take a prescription drug.”

One of  Szakacsy’s motivations for writing the book was to educate teens about the dangers of prescription drugs.

“They’re passing [prescription drugs] out like candy in Camarillo […] they have no idea and they continue to tell everybody how safe it is, so I have a huge job and that’s what all this is about,” said Szakacsy. “It’s not just a book tour, it’s a mission to teach people what DRESS is and teach them about the drugs that induce it, especially Minocycline. Why? Because Minocycline is given for pimples and it isn’t worth getting mutilated for [treatment of] pimples.”

Szakacsy hopes to make her campaign national. “I will not stop, I will fight behind this till I die,” she said. More information about her book and DRESS syndrome can be found on Szakacsy’s website.