Putting the A/C in ACHS 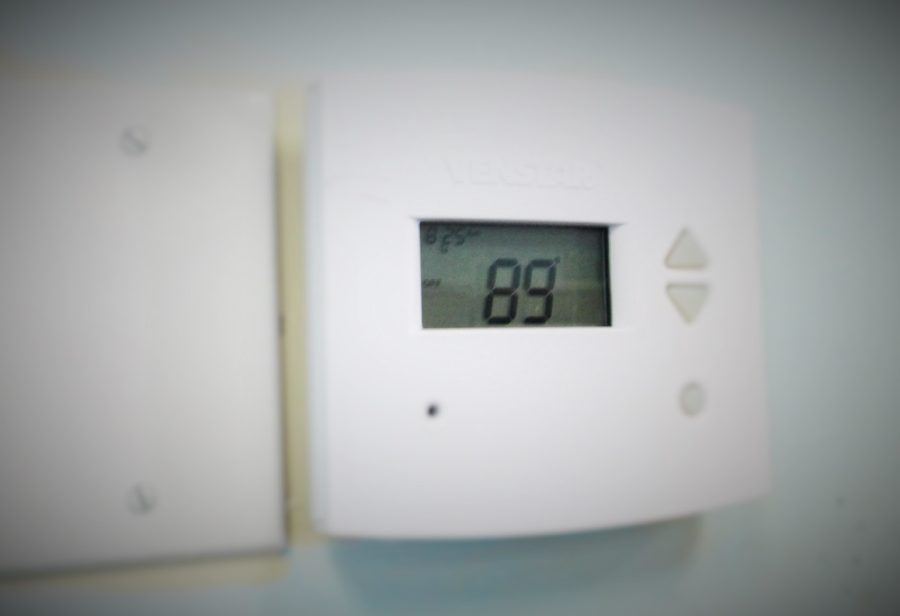 Temperatures in Mrs. Lori Pristera's room in C-wing reached 89 degrees by 12 pm Monday and Tuesday of this week.

With the start of the new school year and rising temperatures, many Cam High students agree that the addition of air conditioning would be beneficial for a number of classrooms across the campus.

According to Chelsea Barrios, senior, the heat, especially during this time of the school year, can become almost unbearable at times without the convenience of air conditioning in the classrooms.”I think that the heat does interfere with the learning environment,” said Barrios. “It causes us to be lazy and it also causes us to dread school even more than some of us already do.”

Barrios also said that she has several classes where temperatures can reach uncomfortably high numbers, and that she believes that students would be relatively more comfortable in classrooms if they did have air conditioning.”I think it would help us a lot because it would help everyone think more clearly and thoroughly,” she said. “When it’s hot, everyone’s focusing on the heat rather than what’s being taught, even the teachers.”

Senior Kaitie Farrell said that Cam High is in dire need of an air conditioning system. “I was in Mr. Near’s Economics class during fifth period and it gets really hot in there,” said Farrell. “And one day, I just randomly said to my friends that we should put the ‘A/C back in ACHS’. They thought what I said was really funny and that I should tweet it on Twitter.”

Despite the fact that it was a “spur of a moment thing”, Farrell’s voicing of her opinion received positive feedback on Twitter in the forms of hundreds of favorites and re tweets.

According to Lori Pristera, English teacher, it can get “Africa hot” in her C-wing classroom. Using an application on her smartphone, Pristera said that temperature peaked at 94 degrees inside her classroom. “I think it’s inhumane to put students and teachers through the heat, it’s stultifying,” she said. “Nothing gets accomplished, and I couldn’t imagine anything worse than being a student and having to sit through the heat through how many periods in a day and having to function and think.”

Microsoft Office Intro and Accounting instructor John Foster said that his classroom, in the ‘N’ building, tends to become extremely hot in the later periods of the school day. “It gets really hot in here,” said Foster. “Yesterday it was 94 degrees in here, but outside it was 90. It would be nice to have air conditioning in here, but I think the easiest solution would be at least to have ceiling fans so the students would be a little more comfortable.”