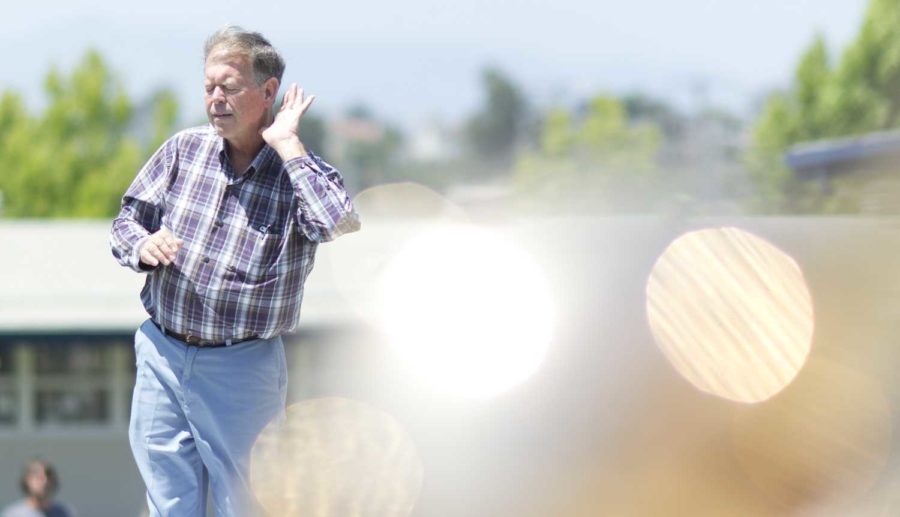 John Stava listens to the band as it gives its last performance.

Students present and past celebrated Stava’s retirement by giving him a final performance in the school’s quad on Sunday afternoon. Planning began three months ago with the idea presented by senior Devin Cooper and aimed to thank Stava for all he has done for the music program.

As a way to pay homage to his nine years at Cam High, they played a piece titled “ACHS Throughout The Years,” written by alum Mr. Joseph Alex Reyes. Reyes, a 2013 graduate of Cam High and a current student at Moorpark College, said that Stava has inspired him to become a music major in either education or composition.

“The moment I found out about this event I was extremely honored to come back and perform for my band director,” said Reyes.

“Mr. Stava has taught me so much, including the music theory I used to create the medley. My goal for the medley was to present each year’s show honorably, highlighting memorable melodies and passages, as well as aiming to bring nostalgia to the alumni without it being too long,” he said.

A standing ovation greeted Stava when he arrived and was led to his front row seat by his own two children. Unbeknownst to Stava, the Band Council also arranged for his wife, Sherrie, to come to the event from the couple’s home in Washington, where she had been for the past three months.

After drum major Georgia Gump, senior, finished conducting the marching song medley, Stava was given the opportunity to lead his students in the school’s Fight Song one last time. In addition, drum majors from each successive year conducted a segment of the music.

“What [conducting the Fight Song] represented was much more than the experience of doing it,” said Stava. “It was pulling generations of people together.”

Afterwards, they met in the cafeteria where they commemorated Stava’s career and ate cake supplied by ACHS Music Boosters. The tribute began with a slideshow of pictures, provided by associate principal Mr. Tom Ito, which was set to the fitting tune of Dan Fogelberg’s “Leader of the Band.”

Following a short thanks by Devin Cooper, senior and Band Council president to those involved and quick speeches by attending drum majors, Stava was passed the microphone to give a comment.

“I’m trying not to tear up too much,” said Stava. “It’s not about the music and the band, it’s about the relationships.”

The idea for the event originated from Cooper, who said that for a few years he’s wanted to do “something big” for Stava. “Now that he’s retiring, we – the Band Council – needed to get everybody together that’s had Stava,” said Cooper.

“I think it was a wonderful surprise and certainly unexpected for Mr. Stava,” said Mrs. Jennifer Blok, audience member and mother of a Cam High band student. “I think that having the kids play is one thing, but having alumni and his family included was something special for the band kids to do.”

Organization for the event began shortly after Stava officially announced his retirement in March. Using a Facebook page as a focal point for people to get informed, Band Council was able to get in touch with 200 current and past students within the first hour of creating it. They were also able to contact alumni from as early as the Class of 2005, the year that Stava became the music director at Cam High.

Band Council went through a lot of effort in order to use the campus grounds and have the event be executed smoothly. “They came to me months ago and we talked about the logistics,” said Dr. Kim Stephenson, associate principal and director of student affairs. “All along the way they ran ideas through me.”

Going into the event, Band Council’s goal was to make Stava proud and to “make him cry in the best way possible.”

“We certainly accomplished [the goal],” said Cooper. “If you know Mr. Stava, you know that he’s never speechless. Today he was speechless.”