From sneakers to boots and boats 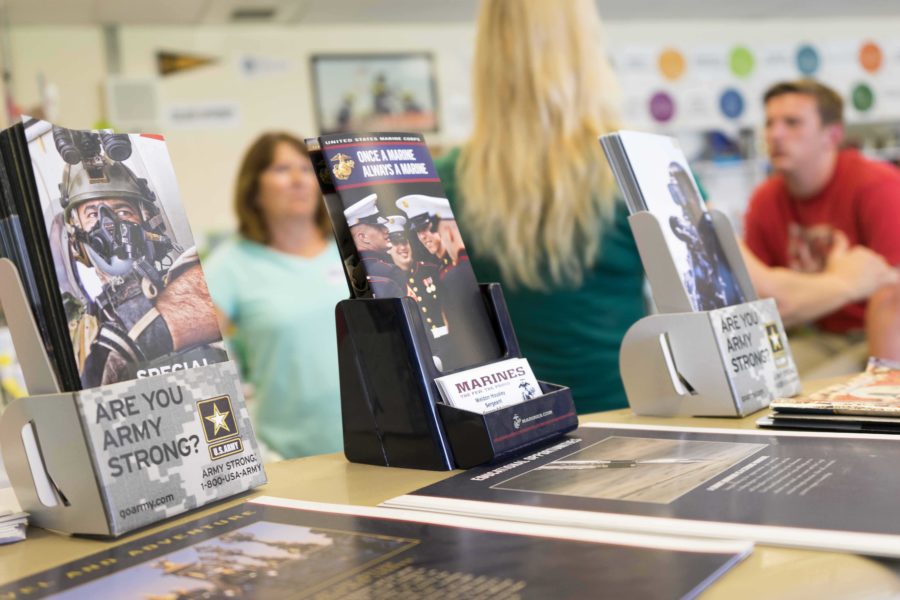 From sitting at their desk to standing at attention, 22 of Cam High seniors have enlisted in the military and are heading to boot camp in the coming months.

Out of 581 seniors at Cam High, 22 have enlisted, one of whom enrolled at the Naval Academy. There are five different branches of the U.S. military: Navy, Marines, Army, Air Force and Coast Guard. Of those students 32% are going the Air Force, 27%  to the Marines, 23% to the Army and 18%  to the Navy.

Jonathan Meier, senior, has enrolled in and will be attending the Naval Academy in Annapolis, Maryland and heads out on June 25. It is not a simple application process to be accepted into the Academy.

There is a long list of requirements that need to be met to even be considered. Nominations from congressional representatives, senators, the president, or vice-president are one of the important requirements.

Meier’s family has a long history of Military influences, such as his grandfather’s 27 years of service in the Army, fighting in the Vietnam and Korean War. Both his father and mother graduated from the Naval Academy. His father was a flight officer aboard an A-6 Intruder aircraft in the Navy and was stationed at Point Mugu. His mother worked in the civil engineering corp on buildings, barracks, and airfields.

“I gain the opportunity to serve my country which is my first priority and the thing I wanted to do most,” said Meier. “There are unique opportunities and experiences. Not too many schools in the world hand you a degree and the keys to a 50 million dollar plane to fly around for a while and bring back.”

Nick Wambold, senior, enlisted in the Marines and is heading to boot camp in San Diego on July 8. He officially swore into the Marine Corps on June 11, 2013. “I have wanted to be a Marine since I was five,” said Wambold. “I remember watching Marines in Iraq and I knew that it was what I wanted to do.”

“I have no idea of what I will be doing but it is the longest and hardest boot camp in the military,” said Wambold. “12 weeks of pure hell, but I’m training to be the best war fighter there is and after boot camp I am going to have further training to serve in the Infantry.”

He explained how the training and the job he will receive will give him experience and discipline that he would not be able to find anywhere else.

“This is one thing that I have always wanted to do and the fact that I am going to be able to finally achieve it is a great feeling,” said Wambold.

The G.I. Bill provides money for education for members of the military. “When I heard about the benefits I would receive, I knew that if I had a family I would be able to take care of them,” said Zack Ayers, senior.

Ayers enlisted in the Army on May 13, 2013 and will be attending his boot camp on June 30 at Fort Benning in Columbus, Georgia.

He plans on serving in the Infantry for 20 years. He discussed how his mother was his biggest influence in enlisting because she works for the Department of Defense.

Julianne Sloan, senior, enlisted in the Air Force on April 1, 2014 and is awaiting her assigned date for basic training. Julianne’s two biggest options are airplane gunner and still photographer.

“There is a long line of military men in my family, so I wanted to support and continue that,” Sloan said. “Also, there were many people who told me I couldn’t because I was a girl and that I’m not strong enough, so I wanted to prove them wrong.”

The Air Force actually has the highest percentage of women of all five branches of the military. The official number is 61,587 working for the U.S. Airforce.

Most of Cam High’s seniors who signed up ship out to boot camp or report to their academies within a month or two after graduation. The men, women, and graduating seniors are devoting their lives to protect the lives of others.

“I have a lot of respect for all of those kids that enlisted or that are going to academies,” said Meier. “We are all getting a pretty small summer this year. We sacrifice our time and commit to serve our country.”