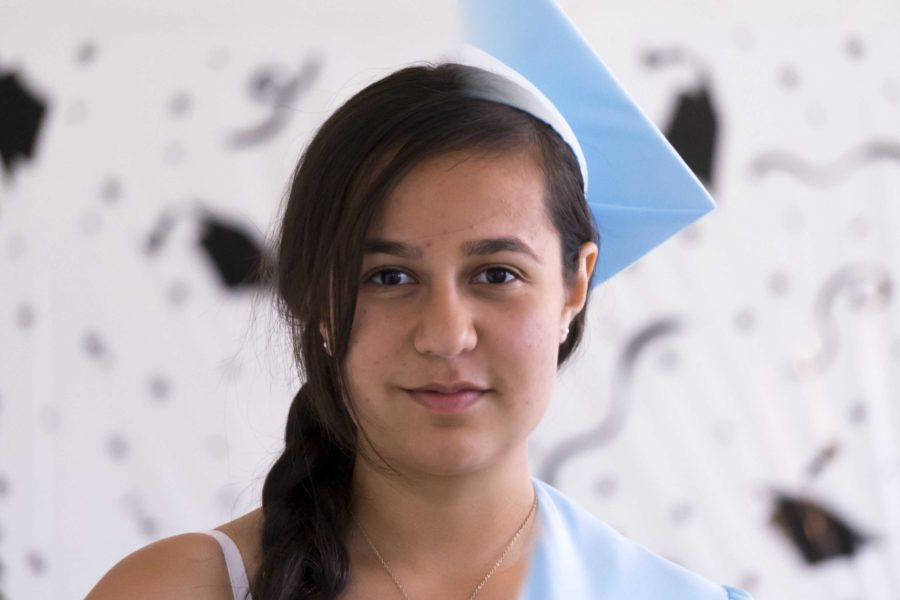 Kayla Colon, Senior, wears her graduation cap in one half of the picture, waiting for graduation and life after high school. Colon is a Stinger staff member.

API rallies, Homecoming, football games, Christmas, Valentine’s Day, Easter Break, Prom. Senior year came and went like a thief in the night. The chapter of high school in the book of your life is only a few words away from the turn of a new page. So before our Senior Scorps leave the nest, the Stinger has some words of advice upon this commencement season.

Life is full of them. Though accomplishing them is one thing, it’s another to be able to triage the tasks that appear from week to week. Priorities are like like leaky roofs. Unless you take care of the source of the problem and stay consistent,you’ll be up to your neck in problems.

18 or soon to be 18. It doesn’t matter, you’re one of the two. And that means living by the same laws your parents live by to an even greater extent than you did before. Things like disorderly conduct and other behaviors are things one should have never done in this first place, but if you did and continue to do so, things of that nature are now grounds for prosecution should you come across the wrong neighbors. It’s not as horrific as it sounds, it just means you’ll have to cut down on ding dong ditching.

Life is a high school and who runs the high school? The cool; popularizers of what’s trendy and the zealots of Yolo Nation. They respond to what feels good without consideration of consequences by blurring the lines of good and bad and labeling all with the word, “cool.” By these standards, cigarettes, underage drinking and running red lights Millennium Falcon style are all cool. Have some common sense and defy the hive mind.  It’s scientifically proven that people are much smarter and perform more efficient tasks separate from the gumball machine of conformists.

People who write down a list of goals in life are 75% more likely to actually complete them. And being that roughly 500 will be fresh out of the factory, it would be exceedingly beneficial to act now instead of saying “Gee I wish I did __________,” when you’re too old to act on it. Travel the world before you have kids, find a stable job even if it means starting at something you don’t care for. There is never a job that you are too good for. At some point Astronaut Leroy Chiao, Congresswoman Marcia Fudge and Jay Leno all worked at McDonald’s.

It’s ok to be wrong

There’s nothing wrong with being wrong. Admitting when you are wrong and swallowing that watermelon’s worth of pride will gain you a lot of respect in the workplace and in your personal life. It will also save you a lot of time and Advil doing the right thing and having some humility.

Life is long. Life in the 21st century is now longer. In a world where an average adult’s life expectancy is now somewhere around high seventies and low eighties. Average. Which means that 50% of everyone will exceed that age. Case in point, whatever you do in your life, make sure you feel comfortable doing it, particularly if it ties in with permanent decisions. Tattoos, piercings, look absolutely nothing is wrong with them. If you don’t want one, don’t get one it’s as simple as that. But unless you want to be a grandparent explaining to your grandchildren the meaning of a high school crush’s name on your arm, never make permanent decisions based on temporary feelings because one day all the petals are gonna fall off that rose.

Always strive to be better than you are

If you never challenge yourself to be a better person, you are basically as mature and smart as a person as you were in High School.

Be nice to people

Yes. As simple as it seems, being nice to people never did anyone harm.

…For it is not the end fellow Scorps. It is only the beginning.