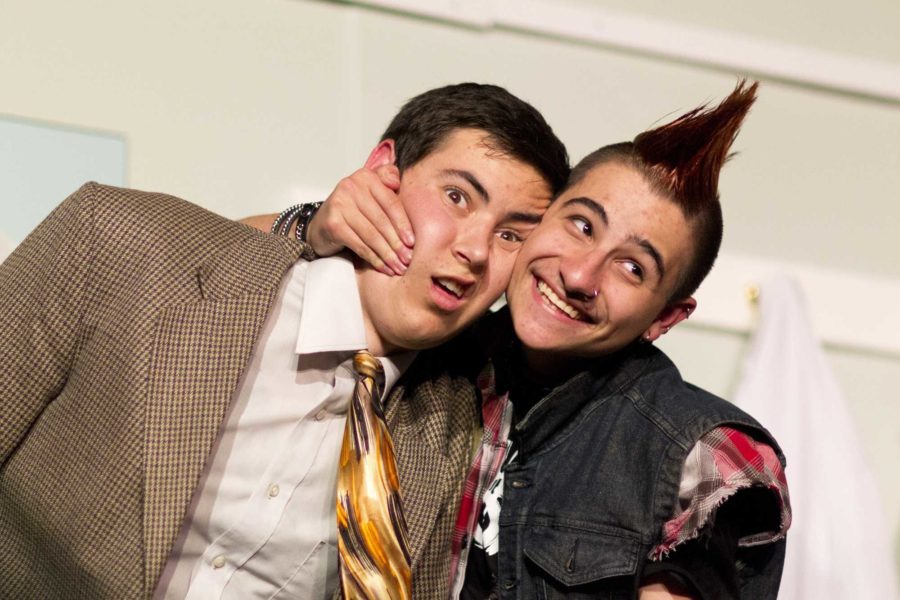 Noah Snair smudges his hand against senior Michael Griffin's face during the 2nd night of "It Runs In the Family"'s production.

After much rehearsal the drama department pulled together a fully functioning performance, save the few mishaps they encountered. “All plays have those [technical difficulties] and incorporate it to make it even funnier,” said Mr. Richard Winterstein, English teacher and the play’s director.

The crew strived to keep up a door that fell off its hinges during the the second act of the play on Saturday. Josephine Smithson, junior and Natalie Tanaka, sophomore were backstage keeping the door up as characters came on and off stage. “We ran and Natalie held it from behind the curtain while I held it upright. I got jammed into a curtain and Natalie had to bend her arm backwards to keep the door up,” said Smithson, junior.

The performances so far are going well and receiving positive bursts of laughter from the audience. “It’s one of the funniest plays we’ve done since I’ve been here,” said Jack Johnson, senior. Johnson played Sir Willoughby Drake, who was in charge of the hospital where most of the characters work.

“I thought they were brilliant,” said Winterstein, “the constant rehearsing made it work.” Winterstein, Cam High’s drama teacher, expressed the pride he had in his students after having witnessed them put on an exemplary performance regardless of the difficulty of the play. British humor, as well as the short and choppy lines, made the play much more difficult for the actors but they managed to make it work.

“It honestly came together the last day before the show, people started to step up their game as it got to the end and they realized how much they wanted this play to go on,” said Danika Elvine, a senior who plays a character named Jane Tate in the play.

All of the cast and audience was thoroughly impressed and delighted by the final product of the hard work the drama department put into the play. “It’s surprising considering how many things went wrong, but I think it went pretty great” said Clayton Doorbor-Roa, junior.