For Some, the Smarter Balance is Neither 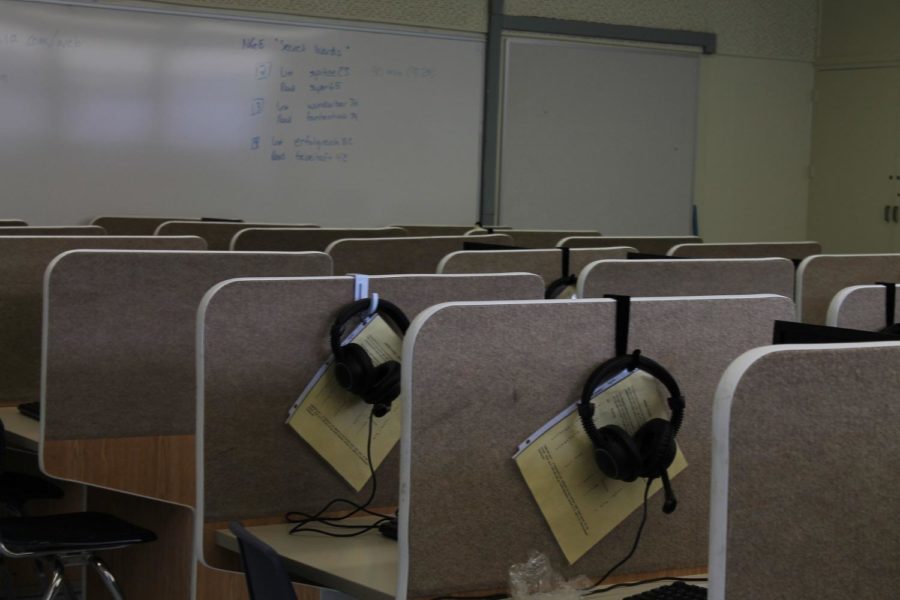 The language lab in A-8 is one of three labs being used for the Smarter Balance Assessment this year. State regulations prevent the Stinger from taking photos of the actual test taking place.

Students, teachers, and administrators claim they are somewhat stressed over the new Smarter Balanced Assessment Consortium (SBAC) as details regarding the logistics of the test are kept hush-hush.

The SBAC is a field study for 2014, which,  according to California’s Department of Education website, means “no student scores will be generated” because “field test data is not valid for the purposes of assessment progress and would not be a fair or valid way to judge student…performance quality.”

The test is all-online and requires the participants to log into a computer using a specified ID number and password. After participants complete a portion of the test, their progress is saved and they log out for other students to use the computer at a later time.

California’s Department of Education created a month-long window to administer the Field Test for the SBAC. Oxnard Union High School District is testing students in the first window of March 31 to April 4.

On a local level, the computer labs at Cam High, including the library, CADD Lab, and language lab in the A-wing, will be closed to all students during regular class periods for SBAC testing days. During testing periods, which includes every period of the day, the library is unavailable to students doing work other than testing.

Mr. Tom Ito, associate principal, gave a break down for SBAC testing. Starting March 31, all juniors were escorted during their English 3 (or equivalent course) class by their teachers to an assigned computer lab, where testing will take place. Scheduled testing will run until Thursday of the testing week, with Friday and Monday being used for make-ups for the field study.

However, according to Ito, “the district is making us test all juniors at our school. I know in some districts they are also testing their freshmen and sophomores.”

Additionally, all juniors will be taking the old pencil and paper versions of the California Standardized Test, due to AB 484, which mandates that juniors  take the Early Assessment Program. The EAP is a portion of the CST that involves writing a short essay giving potential CSU-bound students an extra factor for admissions decisions at a CSU campus.

In the meantime, classes who frequent the CADD and language labs will be barred from using the computers due to the lack of other computers for testing. The library is also a designated site for SBAC testing, which, for the duration of the testing window, will be closed to all students on campus during class periods.