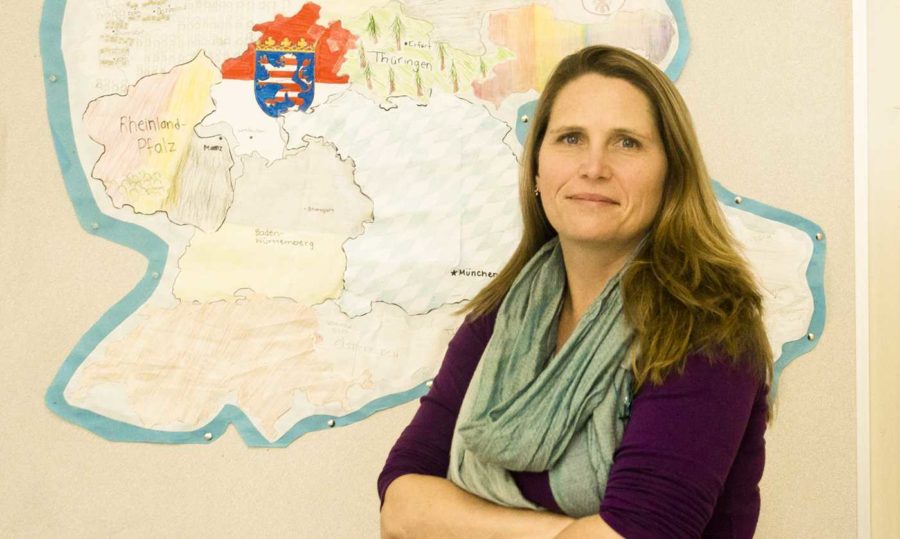 Frau Heidi Kühn, German teacher, eagerly awaits the results of the National German Test that she administered at the end of winter.

Results for the National German Exam taken last winter are in and several students at Cam High have received rewards because of it.

The Stinger’s policy is normally not to interview staff members, however, Hale’s accomplishment merited a few comments: “You had to read articles and watch videos and then the questions were in multiple choice format,” Hale said. The test, which took close to two hours, was administered in the language lab at Cam High.

Hale has been speaking German since his freshman year and earned the Oxnard Union High School District’s bi-literacy seal. “Going to Germany with the G.A.P.P. program was the highlight of my high school career,” said Hale, who also speaks a little Russian will attend the University of Washington in the fall. “It was an opportunity to live in a different culture on a day to day basis and I really liked that.”

The National German Exam is created and administered by the  American Association of Teachers of German. The AATG also sponsors a considerable amount of students taking trips for study in Germany.

“Usually I do study sessions,” said Ms. Heidi Kuhn, a Cam High German teacher, “but this new format made studying harder with only one sample test.”

“Everyone was nervous,” said Kuehn. “We started our study session two months prior”.

Jeanette Dall, senior and German 4 student, took a particular interest in the new audio and visual portions of the test. “It wasn’t read and then answer, which got boring, but useful information with relevant situations, just in German.”

The exam was considered harder than standard college prep testing, one reason being that most students are not accustomed to “an English STAR Test, but in German,” said Dall.

Now that the German students at Cam High have received first-hand experience with the new computerized version, which is similar to the format the state of California wishes to implement with the Smarter Balanced Assessments, the German-language students say they possess a greater understanding of the test and are prepared for them when they become the norm.