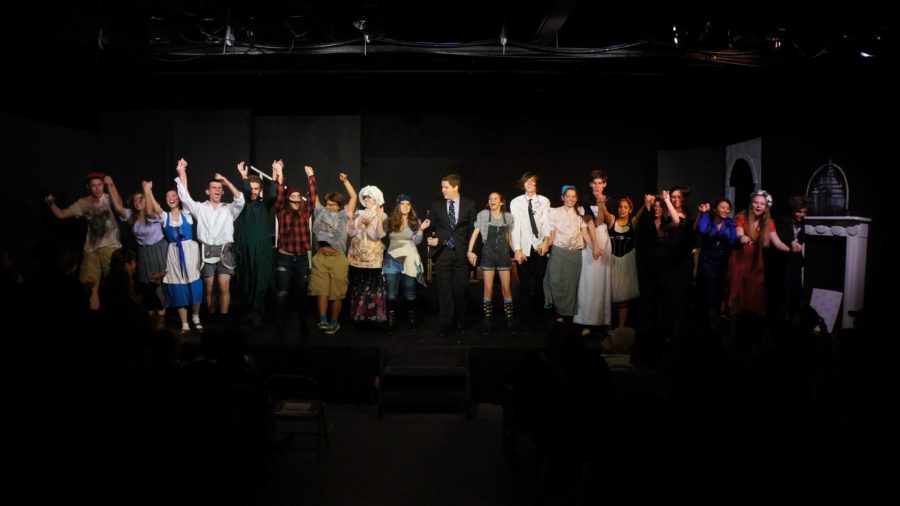 A very successful drama crew, bowing to the crowd.

Mr. Richard Winterstein sat back and watched his drama students perform on Thursday night, but was more relaxed, less concerned about stage ques and lighting. Winterstein, drama instructor at Cam High, was watching for the first time as drama students chose, rehearsed, directed, produced and acted a play without his direction. He simply taught the students how to do a show-and they did it-to their credit, too.

On Thursday, Feb. 7, Drama students began a three-night run of the first student-directed production. Opening night was packed with an eager audience that anticipated a parody of tales like Cinderella, Snow White, Hansel and Gretel, and many more.

Though many students felt uncertain about the possible delivery of the performance leading up to the play, Cam High students were greatly surprised to find a performance that by most standards, has trumped drama’s past productions.

A comedic parody, The Brother’s Grimm Spectaculathon went above and beyond the chuckles and laughs. The audience was hardly silent. In fact, that’s the last thing they were. The cast of over 19 students performed the one act play in a little over an hour and a half. But one barely notices time when they are rolling in their seat.

Within the first five minutes, if one does not find the opening monologue funny they’ve got issues. Now I’m not one to laugh easily, so it was nice to see the subtle jokes. The show was packed with political jokes, one-liners, slapstick, puns, self deprecation, juxtapositions, irony, the list goes on. The acting was tungsten solid too. Everyone had their lines, the cast had complete trust in one another, transitions were seamless, everyone had a natural look that gave an effortless-looking delivery. There were no weak links.

Filled with plot twists and irony, The cast felt comfortable on stage, as though rehearsals had paid off in the details of onstage relationships. It was clear that students were able to put their creativity in without any restrictions, and that’s one of the unique things that stood out in the performance. One hopes that if this is the result of allowing the drama crew to work unfettered by the confines and strictures of normal play preparation, they continue to do it.

The play ended with a standing ovation, and will only be performed for three nights.